Controversial music executive Lavida NOTA has taken a swipe at his compatriot Blxckie over the “Werrkk” music video the songster recently released.

NOTA is a big fan of Blxckie and has been since the songster popped into the music orbit. However, he had nothing but criticism for the music video, which he thinks objectifies impoverished black girls. He described as a new “low” Blxckie using his fame and popularity to paint black ladies that way.

He describes that culture as part of what dehumanized black women. You can check out the tweet below.

At the time of writing, Blxckie had not responded to NOTA. He’d probably seen NOTA’s objection. But it’s unlikely he would respond. 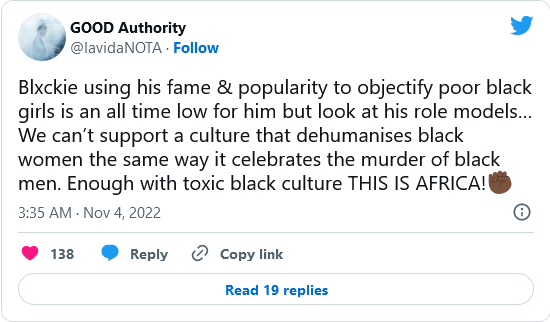 Anyway, Blxckie is one of the buzzing voices in South African rap right now. The songster rose to fame recently and has managed to remain musically relevant since, dropping numbers that resonate with members of the public. He recently released a body of work titled “The4Mula,” which was well-received by fans.

NOTA”s callout wouldn’t surprise anyone who knows the man. He’s infamous for always stating things as they are. Not surprisingly, he has riled many in the music and entertainment industries and continues to rile them.

Tags
Blxckie Nota
John Israel A Send an email 5 November 2022
Back to top button
Close
We use cookies on our website to give you the most relevant experience by remembering your preferences and repeat visits. By clicking “Accept All”, you consent to the use of ALL the cookies. However, you may visit "Cookie Settings" to provide a controlled consent.
Cookie SettingsAccept All
Manage Privacy