Controversial culture critic Nota Baloyi was unimpressed by Slikour’s handling of his interview with Nasty C, and has lashed out at him (Slikour).

Slikour recently had a sit-down with Nasty C to discuss the latter’s recently released “Zulu Man With Some Power” album.

Nota thinks Slikour did not handle the interview professionally. He accused the interviewer of explaining his questions instead of leaving them for his guests to answer. He ultimately accused Slikour of being as ass-licker who would do anything to sustain his cheques.

By the way, Nota had previously clashed with Nasty C over the album which was the subject of discussion with Slikour. Nota was of the opinion Nasty C ought to have rapped in his “Zulu Man With Some Power” album. He ultimately dismissed the Coolest Kid in Africa.

Nota is noted for speaking his mind. So it is nt surprising he should fire a shot in Slikour’s direction. In his candour about the culture and South African hip hop generally, Nota has riled any artistes, including Cassper Nyovest and Zoocci Coke Dope.

You can check out Nota’s latest  controversial sally below. 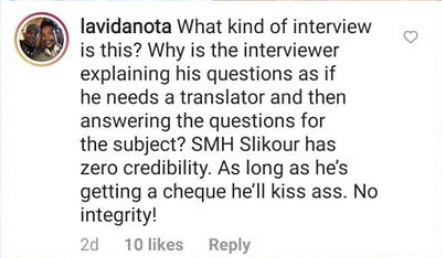 What do you think of Nota’s position about the interview. You may share your thoughts in the comments below.

Tags
Nota
John Israel A Send an email 9 March 2021
Back to top button
Close
We use cookies on our website to give you the most relevant experience by remembering your preferences and repeat visits. By clicking “Accept All”, you consent to the use of ALL the cookies. However, you may visit "Cookie Settings" to provide a controlled consent.
Cookie SettingsAccept All
Manage Privacy