Will Nota ever gt tired of tearing into Cassper Nyovest? We can’t tell but can only inform y’all that he’s fired shots at the Family Tree rapper again.

Cassper Nyovest recently turned 31. But before he reached that milestone, he’d splurged on a Frank Muller and then copped a McLaren, sending a storm of excitement across South Africa.

But Nota, a music executive and culture critic, insists that Cassper’s claim of ownership is nothing short of a gimmick. According to Nota, the was given to the “Doc Shebeleza” hitmaker as part of a promotion, and that Cassper would return it at the end of the contract.

He insisted that the dealership had worked with the likes of Black Coffee and DJ Euphonik. Apart from the car, Nota had claimed that Cassper Nyovest got nothing else. He only gets to ride around with the car as one of the leading figures in South African music. 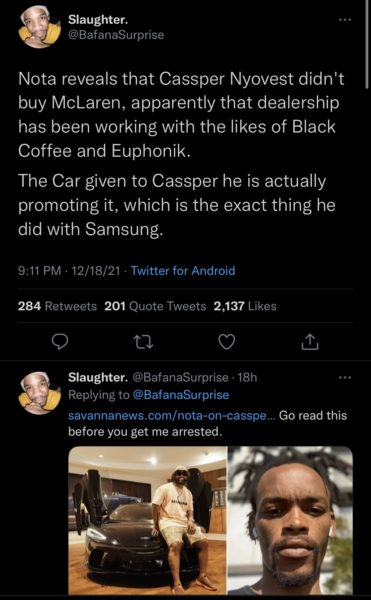 Nota was right when he said Cassper Nyovest didn't buy the McLaren and the dealership has been working with influencers such as Amanda Du Pont for a very long time. In 2018 Amanda Du Pont pulled the same stunt on us & pretended she bought a McLaren but it was a paid partnership. pic.twitter.com/CTQg47IVkQ

Cassper is yet to respond to Nota’s latest claims. He’s never been a fan of Nota. The two have had a public spat previously and Cassper Nyovest had ended up dismissing Nota as a fraud.

It remains to be seen how he would take on Nota this time.

Tags
Cassper Nyovest Nota
John Israel A Send an email 20 December 2021
Back to top button
Close
We use cookies on our website to give you the most relevant experience by remembering your preferences and repeat visits. By clicking “Accept All”, you consent to the use of ALL the cookies. However, you may visit "Cookie Settings" to provide a controlled consent.
Cookie SettingsAccept All
Manage Privacy