The Ugandan Government is unapologetically contemptuous of gays and has enacted laws to frustrate the gay community in the country. One person who is feeling the frustration of the gays in Ugandan and has not hidden her chagrin is Ntsiki Mazwai.

The controversial South African poet is famous for speaking her mind and for defending the oppressed, from GBV victims to the LGBTQs. So her taking on the Ugandan Government is nothing surprising.

The Ugandan Government recently enacted a law that criminalizes same sex marriage as well as prostitution.

Speaking on the law, Ntsiki Mazwai had described President Yoweri Museveni as a disgusting old man and Uganda as a sick country. While some social media denizens shared her thoughts, others dismissed it. You can check out her tweet below. 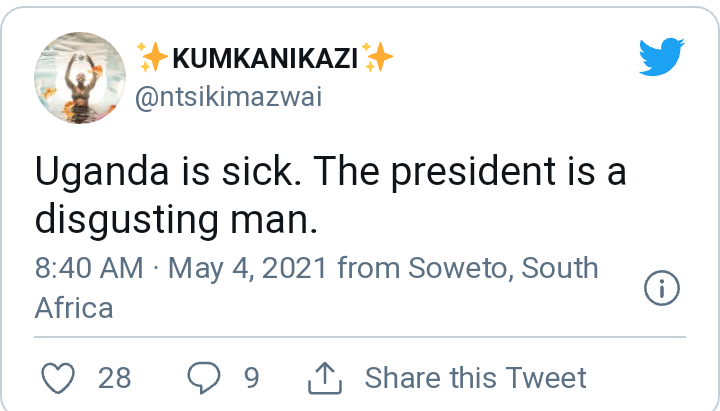 By the way, DJ Euphonik and DJ Fresh trended for allegedly sexually assaulting a lady, Ntsiki Mazwai was in the vanguard of those condemning the duo and calling for their prosecution. Ultimately, the case against the duo was thrown out for lack of evidence.

Well, what do you think of Ntsiki Mazwai’s take on the Ugandan Government and its anti-gay laws? You many want to join the conversation by dropping your thoughts in the comment section below.