Mzansi songstress Zandie Khumalo has released the artwork for her imminent song “Onjengawe.” The songstress had previously informed fans of the song’s imminence.

In an Instagram post yesterday 6 January, the songstress had shared the cover art of the song, informing fans that it would be released on a symbolic day: her birthday 15 January.

The inspirations for the song “Onjengawe,”according to a press release from her, are good men. The song bears the message of love. In her love vision, the songstress is old school – by her own admission. She describes love as central to her calling as a musician

With “Onjengawe” Zandie is determined to redact the narrative that men are trash. In her song, she makes it clear that good men can still be found… men who love their families, their partners and their children, as well as take care of them.

Already, the music video for “Onjengawe” has been shot It promises to unleash the fires of nature on the listener. 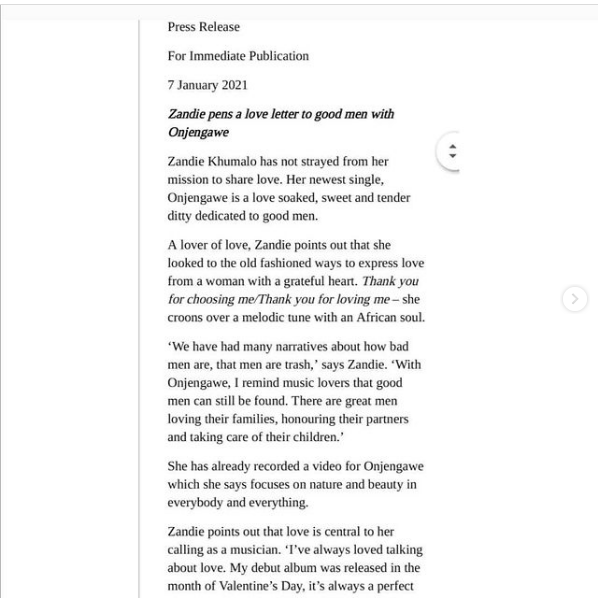 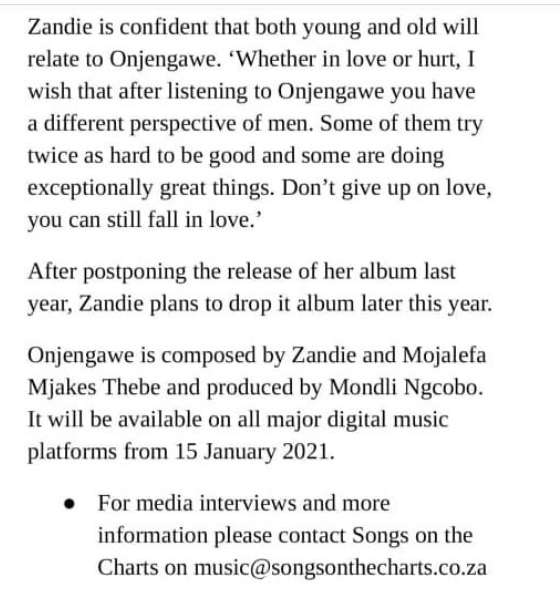 By the way, the songstress also informed fans, who had been disappointed when she postponed the release of her album last year, that be body of work will be released later this year.

Before then, fans have got to vibe with “Onjengawe.”

Tags
Zandie Khumalo
John Israel A Send an email 7 January 2021
Back to top button
Close
We use cookies on our website to give you the most relevant experience by remembering your preferences and repeat visits. By clicking “Accept All”, you consent to the use of ALL the cookies. However, you may visit "Cookie Settings" to provide a controlled consent.
Cookie SettingsAccept All
Manage Privacy