Nhlanhla Lux and his Operation Dudula throng had been accused of invading the home of an EFF member Victor Ramerafe and ransacking the place in their plan to rid their neighbourhood of drugs.

However, no drugs were found during the invasion, and Ramerafe had reported the incident at the Dobsonville police station. The EFF had also asked the SAPs to arrest Nhlanhla Lux.

He was eventually arrested after granting an interview to media personality Sizwe Dhlomo.

Nhlanhla Lux’s advocacy, codenamed Operation Dudula, seeks to toss illegal immigrants out of South Africa and give their jobs to the local population.

In his advocacy, he’s received the support of many and the scorn of many others.

Among those supporting his advocacy is David Kau and actress Bonnie Mbuli.

In a tweet, she had shared “Lux Soap” to show aher support for the embattled Operation Dudula leader. She had also shared about her experience in the United States.

In the States, according to her, she had to operate by the rules because the repercussions of going against the legal system were enormous. So, yes, she’s for Operation Dudula leader and his advocacy. 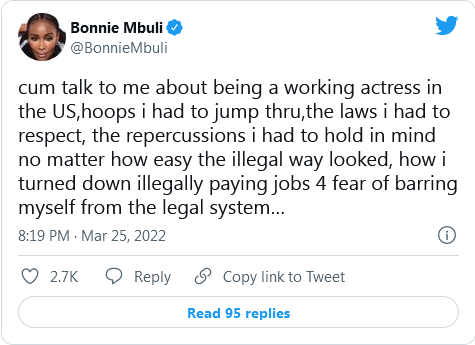 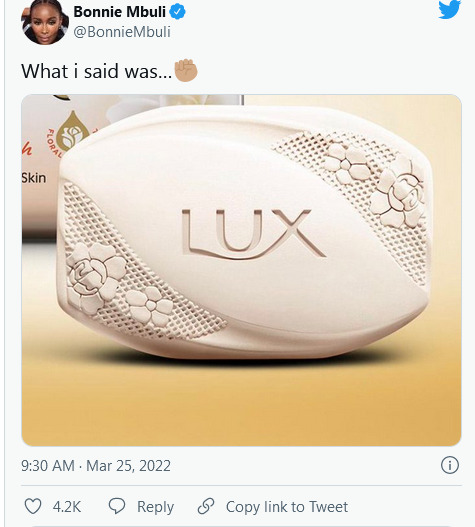 Tags
Bonnie Mbuli Nhlanhla Lux
John Israel A Send an email 28 March 2022
Back to top button
Close
We use cookies on our website to give you the most relevant experience by remembering your preferences and repeat visits. By clicking “Accept All”, you consent to the use of ALL the cookies. However, you may visit "Cookie Settings" to provide a controlled consent.
Cookie SettingsAccept All
Manage Privacy