The fire of Nhlanhla Lux’s advocacy continues. The Operation Dudula leader has given companies in Rosslyn, Pretoria, a 14-day ultimatum about hiring foreigners and illegal immigrants.

Yesterday, Tuesday, hundreds of Operation Dudula protesters had gathered at the Rosslyn police station. From there, they had marched to submit a memorandum calling on companies to stop hiring illegal immigrants.

Among the companies the protesters visited were Afrit and Praga. Recalling why the two companies were among those visited, operation Dudula secretary-general Zandile Dabula noted that both are among the larger companies in Tshwane.

#OperationDudula members are expected to invade various areas around Pretoria in a campaign to rid the areas of undocumented migrants. This is after Operation Dudula leader Nhlanhla Lux Dlamini was granted bail on Monday. @LindokuhlXulu1 is covering the story. #DStv403 #eNCA pic.twitter.com/NyvBTME2ob

While patriots are duduling in Rosslyn I was at metro police offices to lay a complaint for illegal immigrants and illegal traders in Germiston to be arrested. #PutSouthAfricansFirst I pic.twitter.com/cNsyvOpEik 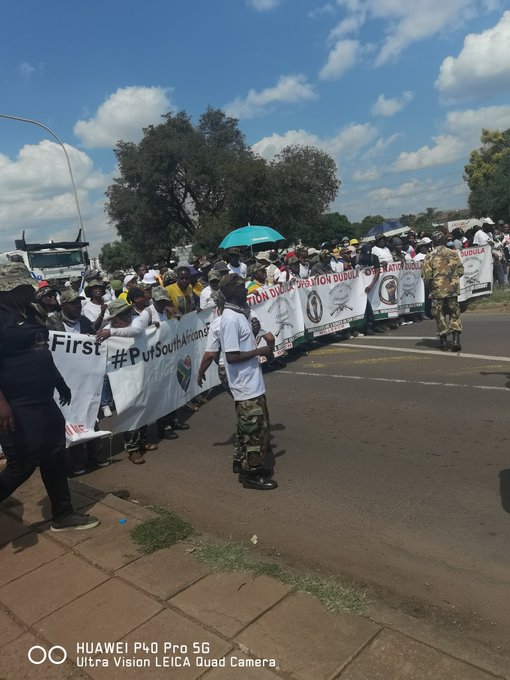 He also noted that Operation Dudula knows that both companies have ghost workers or illegal immigrants among their workforce.

Operation Dudula is a recent manifestation, but the idea behind it has been there for years, leading to sporadic attacks on foreigners and a massive outcry from the global community about “xenophobia” in South Africa.

Last week, pushing the Operation Dudula advocacy, Nhlanhla Lux and his crowd had stormed the home of a pensioner called Victor Ramerafe. He’d reported them to the Dobsonville police, and Lux was arrested.

He spent the weekend behind bars, with his bail application expected to have taken place two days ago, on Monday.

It’s unclear which companies Operation Dudula will visit next.

Tags
Operation Dudula
John Israel A Send an email 30 March 2022
Back to top button
Close
We use cookies on our website to give you the most relevant experience by remembering your preferences and repeat visits. By clicking “Accept All”, you consent to the use of ALL the cookies. However, you may visit "Cookie Settings" to provide a controlled consent.
Cookie SettingsAccept All
Manage Privacy