A member of the executive council (MEC) of the department of basic education, Panyaza Lasufi, has blamed amapiano music for the mass failure of students at matric in 2021.

In a circular issued by the department, it was revealed that only 32 percent of students who sat for matric actually passed. The rest failed because of amapiano music, according to Lasufi.

The circular provoked great amusement online, with many people wondering how the amapiano genre could have provoked mass failure at matric. Some peeps who tried to rationalize the MEC’s statement wondered if people abandoned matric to play amapiano music. 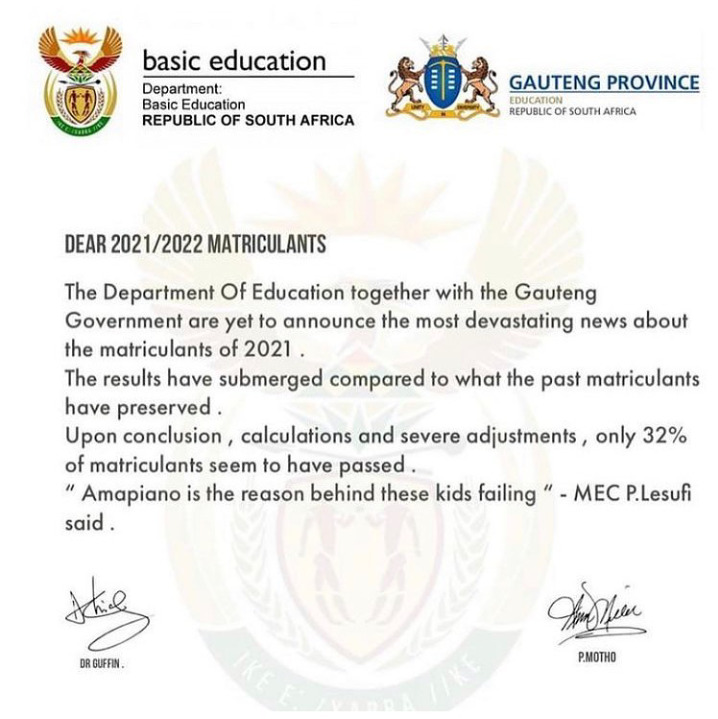 Anyway, amapiano is the in-thing in South Africa right now. Although fairly new, it has been able to not only unseat other genres but to steal musicians from other genres as well. Yes, peeps have ditched hip hop and other genres to focus on amapiano.

Also, some people who are yet to make the switch have most often been told by their audiences to play amapiano music.

In the years since amapiano emerged, some people have given the genre a timeline to disappear into oblivion, but amapiano music has continued to wax strong. And now it’s being blamed for mass flops at school.

Tags
Panyaza Lesufi
John Israel A Send an email 8 January 2022
Back to top button
Close
We use cookies on our website to give you the most relevant experience by remembering your preferences and repeat visits. By clicking “Accept All”, you consent to the use of ALL the cookies. However, you may visit "Cookie Settings" to provide a controlled consent.
Cookie SettingsAccept All
Manage Privacy