Mzansi songstress Pearl thusi has been bashed online for her reaction to Mr. Sweg’s tweet about Ar Lennox. In case you missed it, Ari Lennox has been trending on Mzansi Twitter over her interview with the South African podcaster MacG.

On the set of Podcast and Chill,  MacG had asked what many consider an extremely private question (who Ari Lennox) was sleeping with at the moment). The question threw her off guard and she took umbrage at it.

Reacting to the whole drama, Mr.Smeg had noted that Ari Lennox isn’t beautiful.

Amused by the tweet, Pearl Thusi had reacted with a couple of laughing emojis. She dropped a caveat in the same tweet for the benefit of the ignorant, noting her laughter in no way means she endorsed what Mr. Smeg, who’s famous for going everywhere with his Smeg kettle, said. 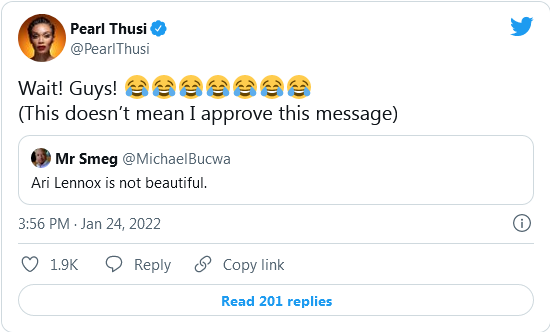 Yet, some peeps did not get her joke, and thus they bashed her.

Mr. Smeg is famous for saying everyone is beautiful. He never calls anyone ugly although they might not be easy on the eyes. For the first time ever, he had described someone as not beautiful.

And that was why Pear Thusi reacted the way she did. Some peeps got the drift as you can see below. 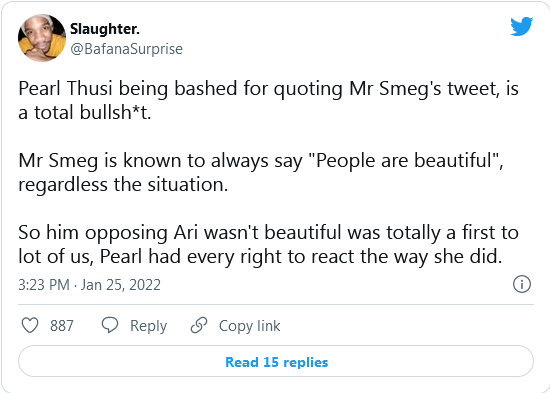 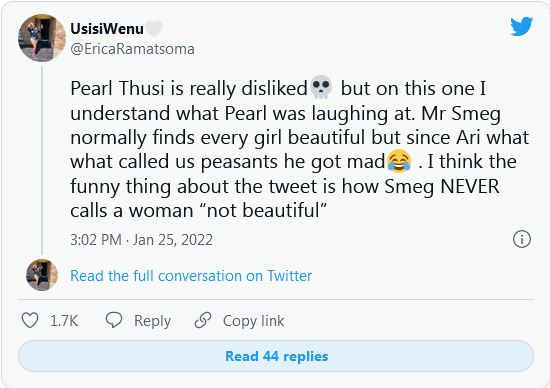 Tags
Pearl Thusi
John Israel A Send an email 26 January 2022
Back to top button
Close
We use cookies on our website to give you the most relevant experience by remembering your preferences and repeat visits. By clicking “Accept All”, you consent to the use of ALL the cookies. However, you may visit "Cookie Settings" to provide a controlled consent.
Cookie SettingsAccept All
Manage Privacy