Dine Ranaka was reportedly suspended after she took part in the now-viral Umlando challenge, which entails twerking and recording the same. She was said to have done the challenge dancing on expensive office furniture.

The video of the dance had been shared online, and it apparently infuriated the management, and she was pushed into the cold.

Reacting to the suspension, Pearl Thusi, who was a former presenter at the station noted that one of the best decisions she ever took for her self-esteem and growth was to leave Metro FM. She expressed the hope that Dineo was fine.

While some fans applauded her for supporting Dineo publicly, others wondered why she should fail to address the reason for Dineo’s suspension but to delve into an entirely new subject while supposedly addressing the issue of Dine’s suspension. 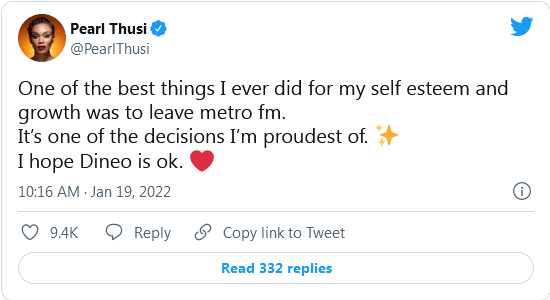 Pearl Thusi’s words did not come as a surprise to some of her fans, however. The actress and media personality is famous for always speaking her mind, especially on matters concerning her friends and associates.

It remains to be seen if Dineo Ranaka will be called back to her beat at Metro FM.

Tags
Dineo Ranaka Pearl Thusi
John Israel A Send an email 20 January 2022
Back to top button
Close
We use cookies on our website to give you the most relevant experience by remembering your preferences and repeat visits. By clicking “Accept All”, you consent to the use of ALL the cookies. However, you may visit "Cookie Settings" to provide a controlled consent.
Cookie SettingsAccept All
Manage Privacy