There is no let-up in the advocacy to get President Cyril Ramaphosa out of power for alleged corruption dating back to the year his farm was burgled.

#PhalaPhalaFarmGate is the hashtag critics are using to pass the message that he should resign or be forced out of power for corruption and for misleading the public. But what really happened?

In 2020, the president’s Phala Phala farm had been burgled by foreigners in collaboration with a farmhand (employee). The thieves reportedly stole millions of dollars from the farm and vanished into neighbouring countries.

Former police chief Arthur Fraser had exposed the president and accused him of money laundering in a filing with the authorities.

#PhalaPhalaGate #PhalaPhalaFarmGate @SundayTimesZA @City_Press @News24 You must all remember that we still go on YouTube and listen to what Fraser once said about Zondo denying him an access to testify. However much you as mainstream media try to discredit Fraser, SA loves him. pic.twitter.com/WgQ0VNI0Hv

Since then, South Africans have taken up the fight to see that the president is not only investigated but forced out of power. Many calls have been made for the president to resign; he’s snubbed them all. 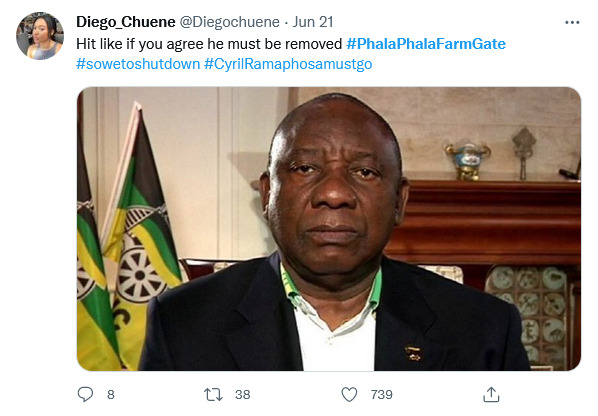 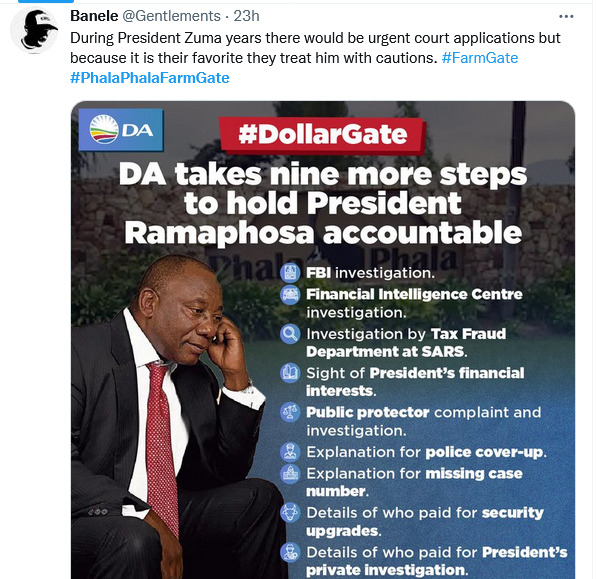 It’s unclear if those advocating his resignation will taste victory ultimately. For now, Mzansi is content sharing details about #PhalaPhalaFarmGate.

Tags
Cyril Ramaphosa
John Israel A Send an email 22 June 2022
Back to top button
Close
We use cookies on our website to give you the most relevant experience by remembering your preferences and repeat visits. By clicking “Accept All”, you consent to the use of ALL the cookies. However, you may visit "Cookie Settings" to provide a controlled consent.
Cookie SettingsAccept All
Manage Privacy