About a year ago, bolobedu house ace King Monada had shared a prototype of the mansion he was building, noting that it would be completed in 2031 or thereabouts.

In retrospect, the “Malwedhe” singer and proponent of the Idibala challenge was only joking. He’s completed his mansion and shared a picture of the same.

The songster shared a picture of him standing in front of his mansion, noting the beauty of the place, the charms of the cars in the garage, the happiness of his family, as well as their independence. You can check out the post below. 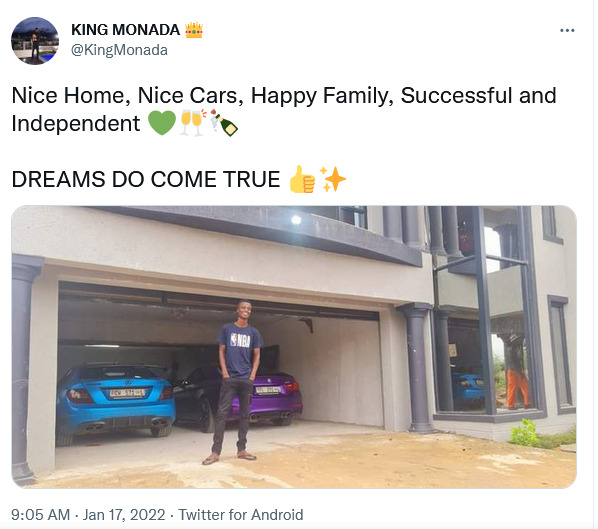 The post has been liked over 16k times and tweeted over 1k times. Many of the muso’s fans congratulated him on the achievement. Earlier when he shared a picture of the mansion under construction, someone had criticized it, noting that the beams were weak.

Anyway, the overwhelming feeling among King Monada’s fans right now is one of celebration. And the songster would not want anyone or anything to take away his joy in this beautiful moment.

It’s been a long and interesting journey for King Monada. He’s released many songs, but his greatest to date remains “Malwedhe” – of the “fainting dance song.” He’s not been able to best that.

Tags
King Monada
John Israel A Send an email 18 January 2022
Back to top button
Close
We use cookies on our website to give you the most relevant experience by remembering your preferences and repeat visits. By clicking “Accept All”, you consent to the use of ALL the cookies. However, you may visit "Cookie Settings" to provide a controlled consent.
Cookie SettingsAccept All
Manage Privacy