Master KG is back with Makhadzi. But that’s not the news. The news is that he is acting like someone keen to take his relationship to, as the saying goes, “permanent site.”

The “Jerusalema” hitmaker has just introduced Makhadzi to his mother. The photo of the meeting was shared online, and fans had mixed reactions to it.

Some fans were excited for Master KG and Makhadzi and wished them the best going forward. Some of Makhadzi’s fans were unimpressed, though. According to these fans, Master KG was an opportunist who got back to Makhadzi because he saw that her career was flourishing.

Master KG had dismissed insinuations that he got back to Makhadzi because of her flourishing career, though.

Interestingly, in a post to Facebook, Master KG had referred to Makhadzi as his wife. He had also kissed her on stage, further cementing his claims to her. 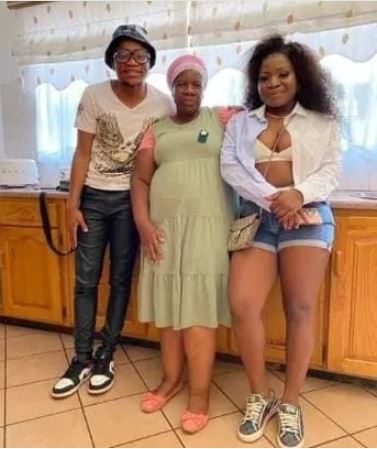 Master KG and Makhadzi had dated and then broken up quietly. Master KG had revealed they had broken up but Makhadzi fans had quarreled at the timing of the revelation, wondering why he should state that at the time Makhadzi was trending for her splendid performance at Lockdown House Party.

It remains to be seen where they’ll go from here.

Tags
Makhadzi Master KG
John Israel A Send an email 18 January 2022
Back to top button
Close
We use cookies on our website to give you the most relevant experience by remembering your preferences and repeat visits. By clicking “Accept All”, you consent to the use of ALL the cookies. However, you may visit "Cookie Settings" to provide a controlled consent.
Cookie SettingsAccept All
Manage Privacy