The potential boxing match between rappers Cassper Nyovest and Priddy Ugly has been the talk of Mzansi for a while now after the pair agreed to slug it off in the ring.

But the match has been delayed. In a series of tweets, Priddy Ugly had given details on why the two are yet to hit the ring, noting they have a 35KG weight difference and Cass has to lose some weight for the who thing to kick off.

The conversation about the weight disparity started after Cassper shared a clip of him training on Twitter. In the caption, he tagged Priddy Ugly and noted that the latter had begun training for the match. He urged Priddy to train harder because he’s coming for a knockout.

In reaction, Priddy Ugly had noted that the Family Tree boss was over 30KG heavier. He even revealed that Cass had ducked fights with Siv Ngesi and Big Zulu and merely picked him because he thought he would have it easy.

You’re 30+ KGs heavier than me & I still gladly accepted the fight. You ducked Siv & Big Zulu when they wanted fight. You thought by picking me, you’d have an easy fight & you thought very wrong!

In a series of tweets, he also gave more details about the fight and why it had been delayed. In the last of the tweets, he indicated that the contract for the match had been sent to Cassper’s inbox, insisting he’s ready. 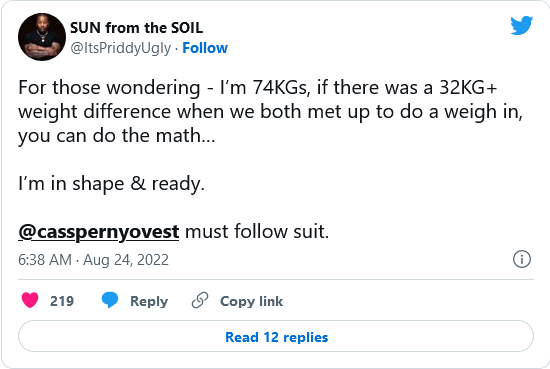 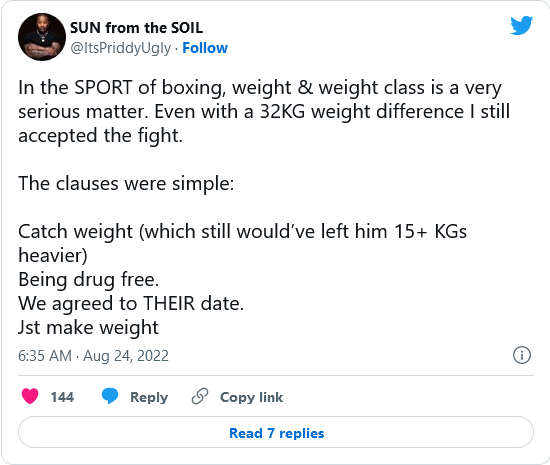 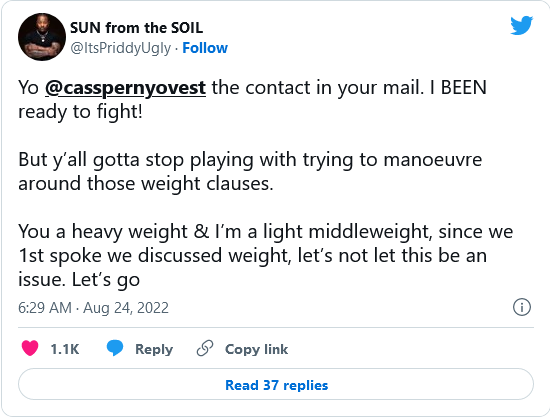 Tags
Priddy Ugly
John Israel A25 August 2022
Back to top button
Close
We use cookies on our website to give you the most relevant experience by remembering your preferences and repeat visits. By clicking “Accept All”, you consent to the use of ALL the cookies. However, you may visit "Cookie Settings" to provide a controlled consent.
Cookie SettingsAccept All
Manage Privacy