Prince Kaybee is not happy at the moment. Apparently someone had ascribed to him works him words he didn’t utter. He quickly set the records straight.

In case you missed it, today is the official launch date of amapiano king Kabza De Small’s album “I Am The King Of Amapiano.” Before the official unveiling, however, a couple of tracks have been released from the 27-track compilation.

The album has launched. Clearly one fan of the amapiano king was unimpressed by the quality of the album, and he bawled out just that in a tweet, using Prince Prince Kaybee’s name as supporting the verdict of poor quality.

The album was literally a flop, according to the Twitter user who goes by the handle @realkatlii007. Prince Kaybee was chagrined by the tweet and immediately shared it with a disclaimer that he never said that. 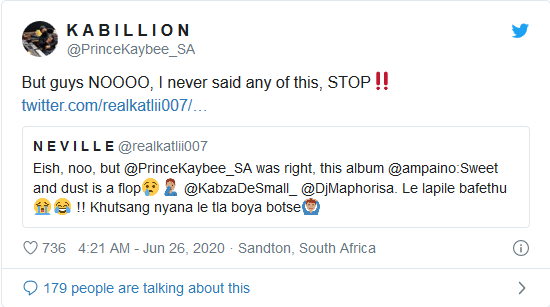 By the way, Prince Kaybee will be performing at the Lockdown House Party tonight alongside artistes like Shimza, The Josh, Benny Maverick, DJ Vektook and Mahoota and several others.

Well, do you recall Prince Kaybee ever saying the words ascribed to him? What do you think about the disclaimer? You may want to join the conversation by dropping your thoughts in the comment section below.