You’ve got to just love and respect the genius that is Prince Kaybee. The talented hit maker is responsible for some of the biggest tunes to have hit the airwaves from “Fetch Your Life” to “Uwrongo”.

Well, he’s on a mission to drop even more. The talented muso took to his social media pages to share the new info. Apparently, he’s got a new song in his head but will only work on it if he gets 3K retweets. It’s reportedly titled “Hosh” and he has revealed that it would only take him one week to produce and release.

You might want to get retweeting because we know it’s going to be a dope drop. The Mzansi star has barely even released his new song “Ayabulela” and it’s already among the most played songs on radio stations across SA. 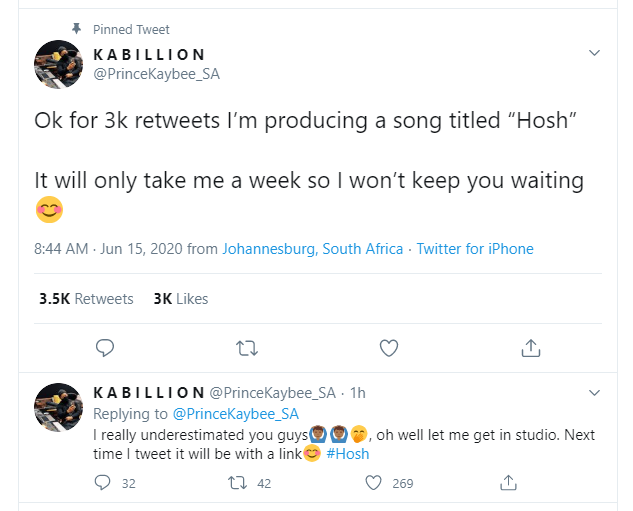 Within few hours, the tweet got over 3000 retweets and prince Kaybee heads to the studio to dish out the new song

Tags
Prince Kaybee
John Jabulani Send an email 15 June 2020
Back to top button
Close
We use cookies on our website to give you the most relevant experience by remembering your preferences and repeat visits. By clicking “Accept All”, you consent to the use of ALL the cookies. However, you may visit "Cookie Settings" to provide a controlled consent.
Cookie SettingsAccept All
Manage Privacy