The issue of artistes owning their masters surges now and again in public discussion, with artistes, obscure and famous, weighing in.

The latest to weigh in on the subject is notable South African disc jockey and producer Prince Kaybee. In a recent thread, the “Fetch Your Life” muso acknowledged that the ownership of masters pops almost every month on his time, but that he’s yet to engage it.

He made it known that he doesn’t own his masters. According to him, owning one’s masters might be good, but it is just not for everyone. Owning masters as an independent artiste will only make sense if the artiste knows how to profit from it.

Prince Kaybee’s take on the subject has generated a great debate among his fans. You can check out the thread below. 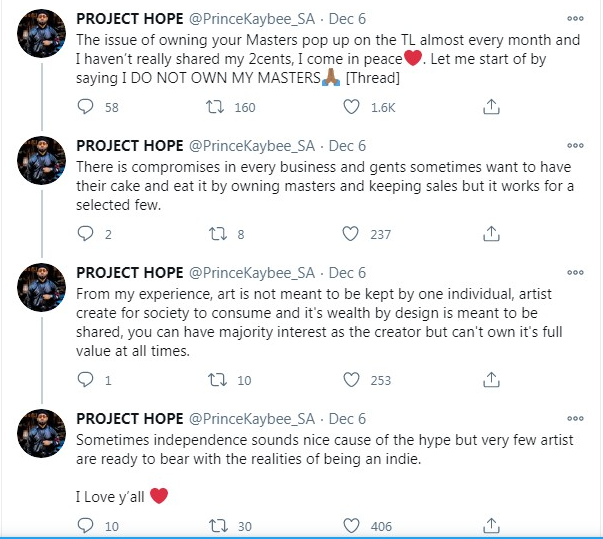 What do you think of Prince Kaybee’s take on the subject? You might drop your thoughts in the comment section below.

Tags
Prince Kaybee
John Israel A Send an email 8 December 2020
Back to top button
Close
We use cookies on our website to give you the most relevant experience by remembering your preferences and repeat visits. By clicking “Accept All”, you consent to the use of ALL the cookies. However, you may visit "Cookie Settings" to provide a controlled consent.
Cookie SettingsAccept All
Manage Privacy