Prince Kaybee might be in a happy place in his career right now, having secured the masters of his debut album, “Better Days,” which premiered in 2015.

Prince Kaybee announced this to his fans on Twitter, letting them know the album was taken off streaming as a result of a licensing deal which expired. Now, having secured the masters for the project, he’ll be bringing the project back online this week.

The responses to his post indicated some fans can’t wait to lay their hands on the project, should it be re-released. Others merely laughed, trying to make comparisons between Prince Kaybee and his rival DJ Maphorisa. 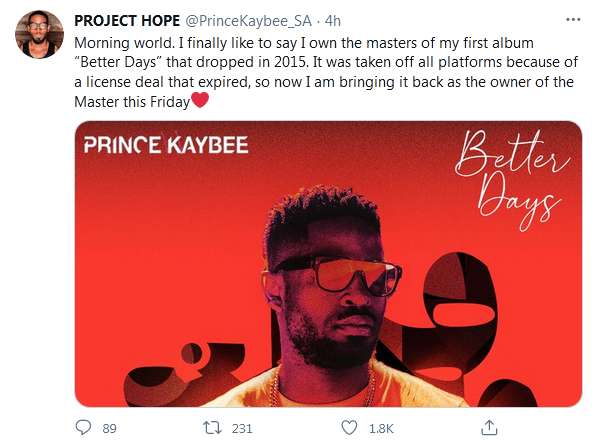 At any rate, it is looking light “Better Days” might be here for Prince Kaybee with this new career milestone which invariably brings to the fore, once again the  vexed issue of masters and ownership

The issue of masters, as well as ownership of them, has been a subject of serious debate among artistes in South Africa and elsewhere. While some artistes think owning masters is a big deal, otherwise think otherwise.