Mzansi muso Prince Kaybee has just taken fans through a bend of fevered expectancy with the unveiling of the tracklist of his upcoming 4th studio album aptly titled “The 4th Republic.”

It’s a 22-track compilation. The body of work is as rich in tracks as it is in guests. Lebo The Great, Nomwazi, Lady Zamar, Tyla, Black Motion, King Monada, Polaris, Masuda, Presss, Rethabile, Nokwazi, Ami Faku Senda, Ngasii, Afo Brotherz and Andiswa are among the guests in the album. 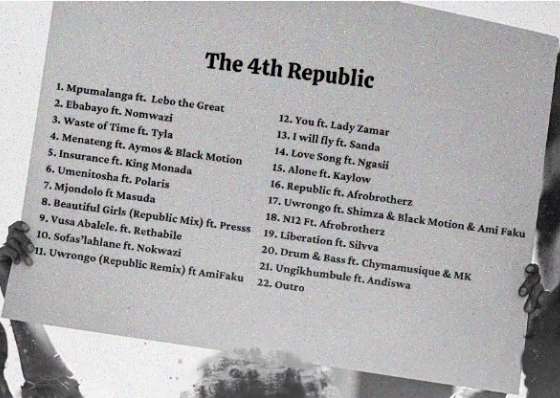 The tracklist had a lady bearing a placard, seemingly at a protest. There were other figures in the background. From the looks of it, Prince Kaybee might be planning a revolutionary statement with the album.

In his caption, he had called music a revolution and a better view of life, melodic. He ended by thanking all the artistes who agreed to work with him on the album.

The reception for the tracklist has been rapturous, so it is apparent fans are looking forward to the album. By the way, “The 4th Republic” album drops next month.

As South Africa’s premier music and entertainment blog, you can count on us to bring you the album on release. Stay tuned for updates.

Tags
Prince Kaybee
John Israel A Send an email 11 January 2021
Back to top button
Close
We use cookies on our website to give you the most relevant experience by remembering your preferences and repeat visits. By clicking “Accept All”, you consent to the use of ALL the cookies. However, you may visit "Cookie Settings" to provide a controlled consent.
Cookie SettingsAccept All
Manage Privacy