Recently, Prince Kaybee thought of an idea to give a platform to gifted female singers in Mzansi. He got to listen to several unknown voices in the country and selected 10 of them to work with.

As he admitted later, he had to pick 10, jettisoning the initial plan of just one, because there were several talents on display and picking just one wouldn’t be best. So he expanded the list. Project Hope was born.

As Prince Kaybee announced, he had compiled songs from all the artistes on Project Hope into an album titled “Project Hope (Season 1).” The body of work has been slated for release on 2 October 2020. That’s about a month away. You can check out his post below. 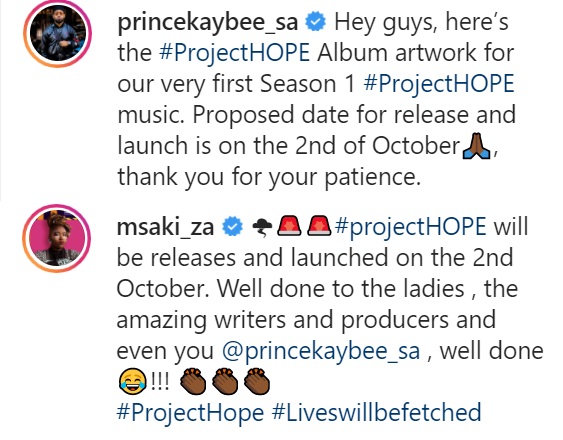 We’re going to share that project on release, of course.

With “Season 1” as part of the title, only can only guess that the star DJ and producer of the “Fetch your Life” fame will make this a regular – you might say yearly – affair. The success of the first project might determine how the next might be received.

For now, y’all gotta keep your eyes open for 2 October, when the hope of musical glory, fame, and fortune will be ignited for 10 as yet obscure artistes.

Tags
Prince Kaybee
John Israel A Send an email 14 September 2020
Back to top button
Close
We use cookies on our website to give you the most relevant experience by remembering your preferences and repeat visits. By clicking “Accept All”, you consent to the use of ALL the cookies. However, you may visit "Cookie Settings" to provide a controlled consent.
Cookie SettingsAccept All
Manage Privacy