The advocacy has spread across the world, from France to South Africa… You know, South African disc jockey and producer Prince Kaybee has popped on the trends several times in the past, for his songs and more.

Days back, however, the “Gugulethu” hitmaker made it clear he doesn’t want to trend whatsoever. So whatever might make him trend should be avoided by all, including his fans. Instead, he urged people to fight racism and not make him trend online.

He made that clear just before his set on the immensely Lockdown House Party, an initiative spawned by the coronavirus pandemic and the corresponding enforcement of lockdown measures across South Africa. He asked fans who were enjoying his set to just tweet #RacismMustFall.

Fans found the tweet hilarious. And so did Prince Kaybee’s contemporary DJ Maphorisa, who replied to the tweet with a couple of laughing emojis. 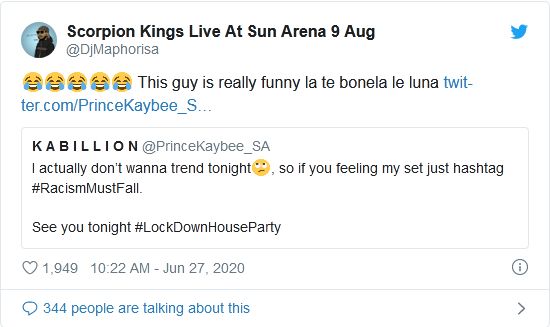 Well, what do you think of Prince Kaybee’s plea fans should not make him trend? You may want to drop your thoughts in the comment section below.