Mzansi DJ and producer Prince Kaybee recently announced his 4th studio album will be out early next year (2021). A wave of speculations has followed his announcement, with some fans appending a date of their own for the release of his project.

Titled “4th Republic,” the album was to have been released this year. Instead, Prince Kaybee snapped about ten ladies from South Africa – unknown singers all of them – and gave them a platform in an album titled “Project Hope Season 1.”

He had apologized for not updating fans on his 4th studio album, admitting he had been neglecting his music of late. Some fans think he will still release the 4th studio album this year. But the songster has disabused the mind of his fans from such.

The date for the release of the album remains February 2021. The songster has also indicated that the songs he had been teasing on his social media channels will make the tracklist of the project. Conversant with them? 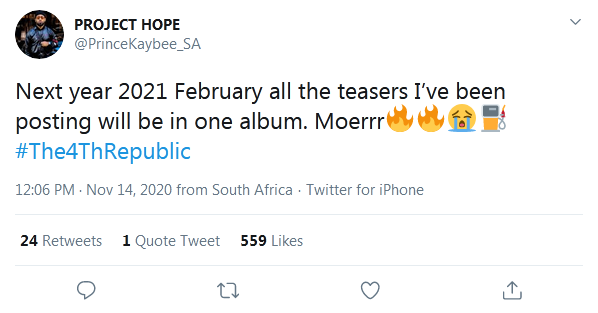 Prince Kaybee’s “4th Republic” album will comprise 20 tracks, according to the musician. Until then, y’all might want to stay tuned for updates by following our social media channels. We’re going to share the compilation here on release.