Prince Kaybee’s musical successes continue with a recent feature in Time magazine. The songster was featured in the list of Time magazine’s 10 best songs of 2020.

Prince Kaybee made it to the list on the strength of his song “uWrongo” which featured the boy band Black Motion, the celebrated disc jockey DJ Shimza and Vth Season singer Ami Faku. Prince Kaybee is No. 9 on the list, just above Oneohtrix Point Never (“Long Road Home”), and just below Stray Kids (“Back Door”).

Other songs and artistes that made the Time list include “People I’ve Been Sad,” by Christine and the Queens, “WAP,” by Cardi B Ft. Megan Thee Stallion, “Yo Perreo Sola Remix,” by Bad Bunny, Ivy Queen and Nesi, “Little Nokia,” by Bree Runway, “Good News,” by Mac Miller, “Think About Things,” by Daoi Freyr, and  “7 Summers,” Morgan Wallen. 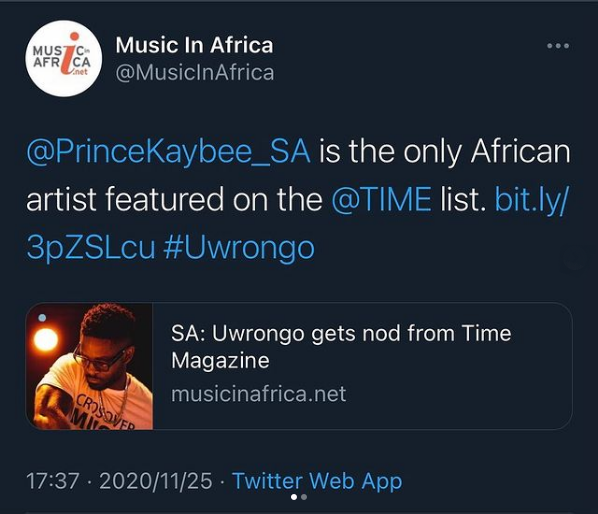 Prince Kaybee’s appearance on the list is especially significant in that he is the only South African on the list. He is so excited about making the list. He shared his joy in an Instagram post showing screenshots bearing the good news of his Time triumph. Fans have been showering him with congratulations.

The news of him making the list popped online amid his recent statement about one day owning a private jet.