Blaqboy Music boss DJ Maphorisa recently reignited his beef with Prince Kaybee when he accused the Low Key Records boss of not crediting his artistes in the recently released “Project Hope” album.

That body of work features songs from ten South African singers who had impressed Prince Kaybee with their singing. The singers are all girls, decidedly.

In a tweet, DJ Maphorisa mockingly called Prince Kaybeee Princess, stating that his problem with him “Princess” is that he doesn’t want to give credit to the “kids” (artistes on “Project Hope”). DJ Maphorisa ended up saying that he, in contrast, credits everyone and therefore boosts of a strong team.

DJ Maphoria tweet elicited a great argument online at the time but Prince Kaybee said nothing about it.

Well, Prince Kaybee has finally responded to DJ Maphorisa’s claim that he did not credit his artistes in “Project Hope” album.

In a laconic tweet, Prince Kaybee urged DJ Maphorisa to “carry on.” The tweet showed credit for a song. You can check it out below. 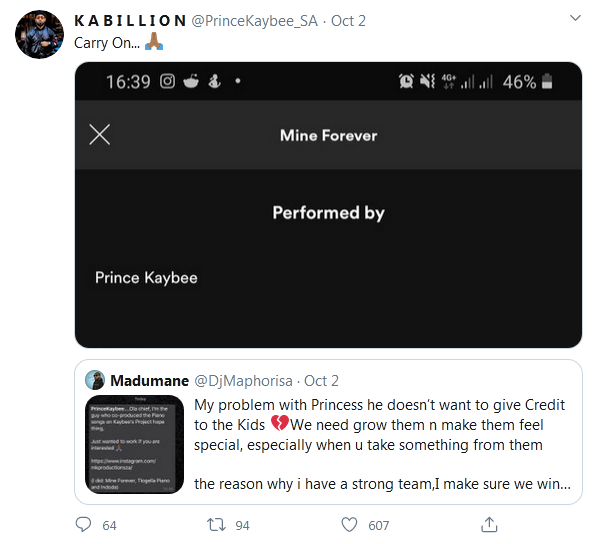