The rivalry between DJ Maphorisa and Prince Kaybee continues with the Blaqboy Music boss shading Prince Kaybee for refusing to credit the singers on his Project Hope album project.

By the way, long before that, when the project dropped, DJ Maphorisa had mocked the whole exercise, asking how the project sounded. He apparently had not listened to it – or just refused to.

The Project Hope initiative featured 10 artistes in all, it is also reported that Msaki, who had worked with Prince Kaybee previously on the song “Fetch Your Life,” was also part of the new album’s project.

Recently, a fellow who had co-produced one of the songs in Project Hope called DJ Maphorisa’s attention to the fact that Prince Kaybee did not credit him for the work accordingly.

DJ Maphorisa responded in a tweet, stating that his problem with Princess (a mordant word for Prince Kaybee) is that he would not give credit to his co-workers on the project and make them feel special. Maphorisa said he has a strong team because he always gives credit to his people. 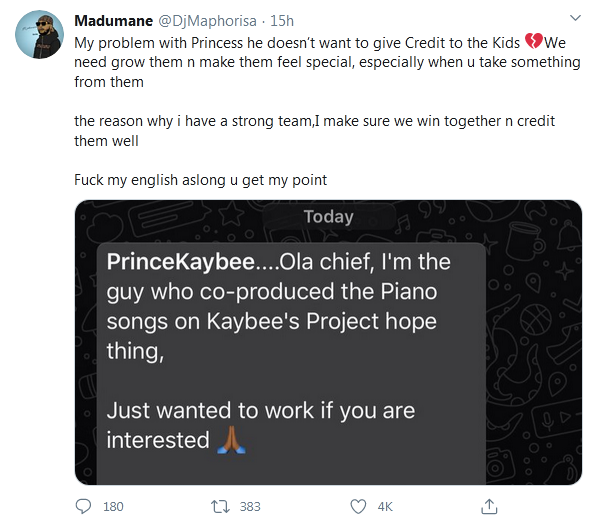 Well, what do you think? You may want to join the conversation by sharing your thoughts in the comment section below.