This morning, Monday 14th February 2022, the information we are getting is that the legendary Prokid’s brother DJ Citi Lyts was shot dead in Soweto. According to 9ice Entertainment Twitter page, the hip-hop DJ was shot eight times last night, 13th February and did not survive the gunshots.

This is a developing story, and the robbers who have murdered the young talented artists are yet to be identified. However, fans and colleagues in the music scene have taken to their different social media platforms to pay homage to the late Disc Jockey. 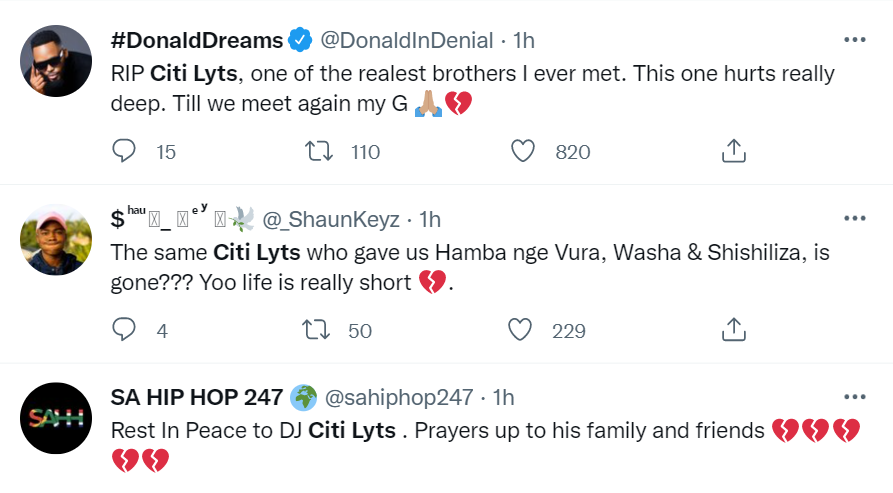 Citi Lyts was one of the highly respected hip-hop DJs in the music scene who also released some of the top songs in the country, including Washa featuring Fifi Cooper, Emtee and B3nchMarQ, Shishiliza featuring Sjava and Krazie, Vura featuring Saudi and Sjava. All these songs were released during his dates with Ambitiouz Entertainment.

DJ Citi Lyts gave us a timeless classic in Vura.

His brother, PRO gave us Heads & Tales, intwana zaboCheeseBoy azim'fatelanga, took it back to the hood with #DankieSan & we embraced him.

DJ City Lyts uncovered his passion for hip-hop music while studying at Yoeville Primary School. He partook in school movements such as Hip-hop & Pantsula dance groups and participated in the school ensemble. While in high school, he started a hip-hop outfit named Flipside. This booted his profession with performances at nightclubs such as BlackOrchard, Club Keys and many more.

Citi Lyts first chance to DJ was when he linked up with hip-hop artist F Eezy and performed as a DJ and hypeman. He after that joined forces with his brother Pro-Kid, which helped cement his talent as a DJ.

His network of friends in the music scene helped him gain the chance to work with the producer behind then South Africa’s biggest song, Roll-up and the award-winning hip-hop artist Emtee. A series of events and consistency catapulted him to become one of SA’s top DJs.

Tags
DJ Citi Lyts
Thato Siyabonga Send an email 14 February 2022
Back to top button
Close
We use cookies on our website to give you the most relevant experience by remembering your preferences and repeat visits. By clicking “Accept All”, you consent to the use of ALL the cookies. However, you may visit "Cookie Settings" to provide a controlled consent.
Cookie SettingsAccept All
Manage Privacy