ProVerb’s love for radio runs deep, and it’s been there for a long time. At some point, however, he thought he was done with the field and was ready to quit.

But fate has other plans. He got a gig at Metro FM and will now join other voices to take one of the most popular South African stations to new heights.

The celebrated rapper had a moment of reflection on Twitter recently, noting how he fell in love with radio as far back as 2002 and got a couple of gigs in the field before finally clinching his current position at Metro FM.

It wasn’t an easy run, of course, and the songster hinted at almost giving up at some point. But the world of radio still loves him and would not let him go just yet. You can check out his post below. 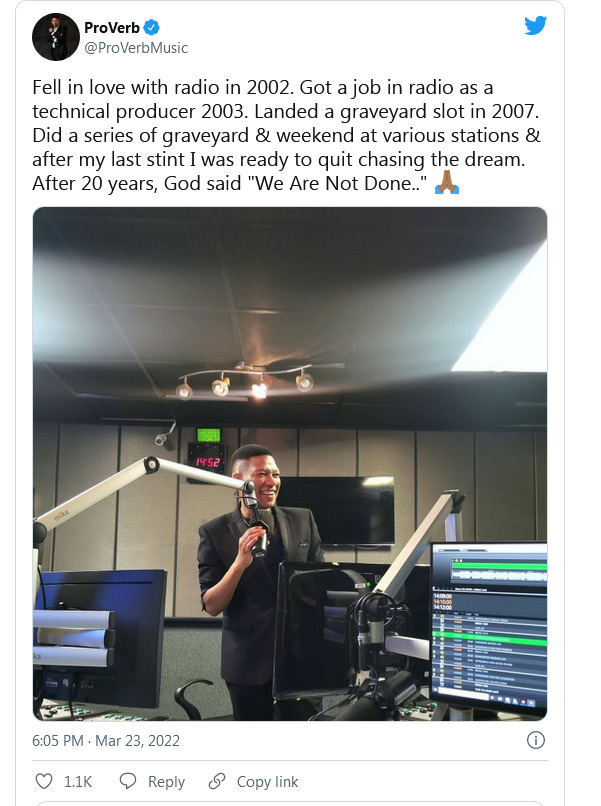 ProVerb is not only a famous radio presenter, but he’s also a distinguished rapper – a part of the old guard. He’s also a presenter of the reality show Idols SA. Talk of having many feathers to your cap.

By the way, the songster has published his memoir in which he detailed several little known aspects of his life, including his divorce.

Tags
Proverb
John Israel A Send an email 25 March 2022
Back to top button
Close
We use cookies on our website to give you the most relevant experience by remembering your preferences and repeat visits. By clicking “Accept All”, you consent to the use of ALL the cookies. However, you may visit "Cookie Settings" to provide a controlled consent.
Cookie SettingsAccept All
Manage Privacy