It was a big scare for South African rapper Blxckie, but the songster is grateful to be alive to tell the tale of his accident.

The songster was on his way to a gig in Durban when the left tire of the vehicle he and his team were traveling in was punctured. The songster and his team returning from Lesotho after a gig.

They had driven from there to Johannesburg to catch the 6 pm flight to Durban. But the road had a different plan for them. Around Bloemfontein, one of their tires was punctured, and the car started careening down the road, totally out of control.

Recalling that moment, Blxckie described it as “hectic.” He was, however, grateful that everyone survived the accident. He’d made alternative arrangements so that he and his team could make it to the gig. To no avail. He missed the gig he was booked for. 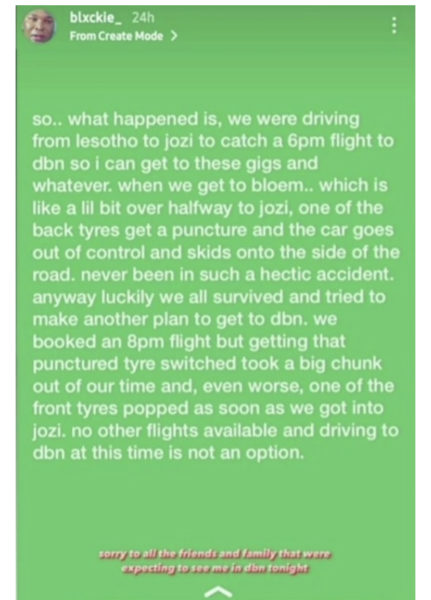 His post saw many fans sympathizing with him and sharing their delights in him and his team having survived it all. Blxckie is but one of several South African musicians who have been involved in an accident in the past few years.

It’s just a year ago when the musicians Mpura, killer Kau and four others perished in a road accident.

Tags
Blxckie
John Israel A Send an email 4 January 2022
Back to top button
Close
We use cookies on our website to give you the most relevant experience by remembering your preferences and repeat visits. By clicking “Accept All”, you consent to the use of ALL the cookies. However, you may visit "Cookie Settings" to provide a controlled consent.
Cookie SettingsAccept All
Manage Privacy