We all can’t deny that the Q Twins are just blessed. It hasn’t been long since they hit the scene as a solo duo signed to DJ Tira’s Afrotainment label. They’re already recording a lot of success with their music. 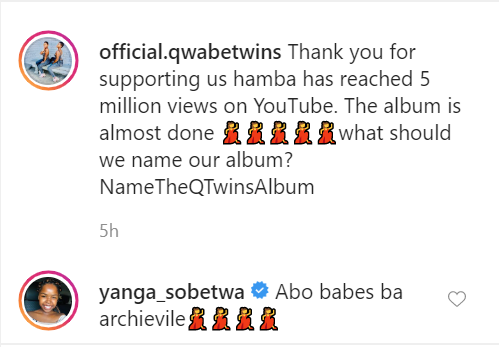 Last week, the twins revealed that they are about to drop a brand new song soon which is expected to be the followup to “Hamba”. The twins’ collaboration with Mzansi rapper, K.O “Rainbow” is currently the most played song across radio stations in SA.

P.S. They need suggestions on what to call their debut album.

Tags
DJ Tira Q Twins
John Jabulani10 June 2020
Back to top button
Close
We use cookies on our website to give you the most relevant experience by remembering your preferences and repeat visits. By clicking “Accept All”, you consent to the use of ALL the cookies. However, you may visit "Cookie Settings" to provide a controlled consent.
Cookie SettingsAccept All
Manage Privacy