Q Twins share new video of themselves singing emotionally “I’m not gonna cry for you”.

If beauty had a voice, it would be that of the Qwabe Twins. The way they deliver emotional songs is just breathtaking. You can’t stop watching until they’re done. That’s how much they suck you in.

The talented twins achieved popularity when they appeared on Idols SA getting far ahead in the competition. However, their exit from the show caused a lot of controversy and earned them a signing to DJ Tira’s Afrotainment label.

Since then, they have dropped their very successful debut single “Hamba” which also featured Tira. It has garnered a couple million views on YouTube alone. 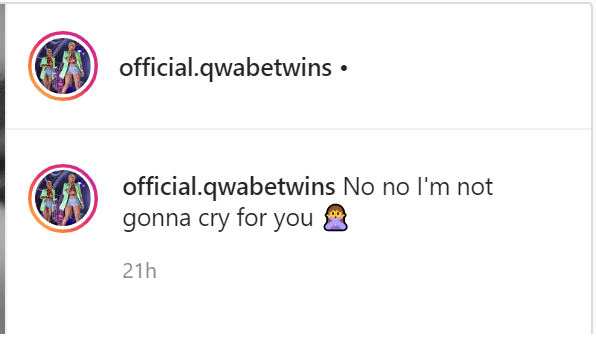 The talented ladies recently shared a video of themselves singing a song “I’m not gonna cry for you”. It is as empowering as much as it is heartbreaking. You might want to take a look, and be hooked by it too.

Tags
Q Twins
John Jabulani Send an email 3 June 2020
Back to top button
Close
We use cookies on our website to give you the most relevant experience by remembering your preferences and repeat visits. By clicking “Accept All”, you consent to the use of ALL the cookies. However, you may visit "Cookie Settings" to provide a controlled consent.
Cookie SettingsAccept All
Manage Privacy