Controversial post and bead maker Ntsiki Mazwai has slammed the hosts of Podcast and Chill with MacG for ridiculing her R70k demand to appear on the show.

Ntsiki Mazwai was one of those who had fired shots at Ari Lennox following her controversial interview with MacG that went viral because the podcaster was explicit in his questions about her sex life.

The hosts of  Podcast and Chill thought she would make a great guest, so they reached out to her.

Ntsiki Mazwai’s business sense kicked in immediately and she demanded R70k to appear on the podcast, causing the hosts to ridicule her.

In a tweet soon after, she had made it clear that the hosts of the show wanted to use her for relevance, adding that she never wanted to be interviewed by them and if they wanted to have her on their platform, they would have to pay for it.

By the way, MacG, who had provoked outrage from a section of social media for the way he questioned Ari Lennox, has apologized to the American for his “distasteful question.”

Although she slammed the hosts of Podcast and Chill for trying to use her “for relevance,” she was gracious enough to call them kings. See the tweets below. 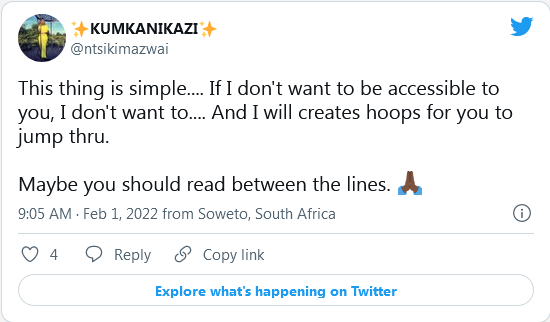 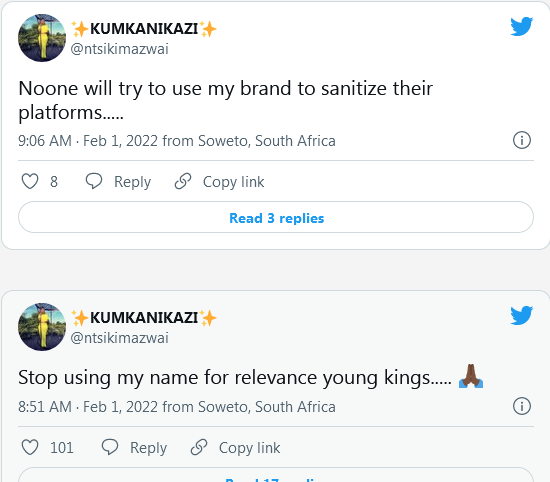 Tags
Ntsiki Mazwai
John Israel A Send an email 3 February 2022
Back to top button
Close
We use cookies on our website to give you the most relevant experience by remembering your preferences and repeat visits. By clicking “Accept All”, you consent to the use of ALL the cookies. However, you may visit "Cookie Settings" to provide a controlled consent.
Cookie SettingsAccept All
Manage Privacy