At the risk of being thought immodest, K.O. would tell anyone who cares to listen that he is the greatest rapper in Mzansi. Some peeps may not agree with his verdict, but the star of the “Rainbow” quartet isn’t changing it.

Well, K.O., who was recently picked as the most played artiste on South African radio, did not release the verdict out of the blue. A fan of his had tweeted that K.O’s name should make the list of the greatest rappers who ever walked the earth.

K.O shared the tweet with a poignant note stating artistes rarely ever get that recognition until they die. It’s part of the culture, according to him, and it’s sad. The culture notwithstanding, he will keep on working on his art. 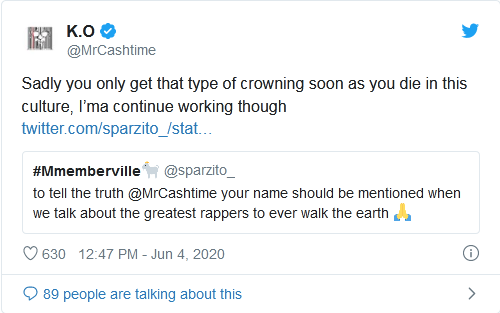 K.O. probably arrived at his verdict about that based on several experiences, including the death of PRO, also called ProKid, years ago. PRO was a gifted hip-hop and one of the finest on the circuit. But he wasn’t recognized as such until his death.

Well, do you agree to the claim K.O is among the greatest rappers in the game? You might wish to join the conversation by sharing tyour thoughts with us in the comment section below.