When couples get married, it is usually with the expectation that they live blissfully after, until death intrudes. This was probably the ideal DJ Black Coffee and his wife Enhle Mbali envisioned when they got married year ago.

But it didn’t work out. Years into their marriage, allegations of infidelity on Black Coffee’s part began to pop up. Before their public separation, news had circulated their marriage was stressed, but thy denied this. The truth came out soon after, anyway.

Now it is public the two are finalizing their divorce. Enhle Mbali’s lawyers are making demands which Black Coffee’s team consider exorbitant and unreasonable. It has being reported that Black Coffee has instructed his lawyers not to give in without a fight, given the unusually high demands his wife is making.

Although Enhle Mbali’s lawyers would prefer the demands be treated with some privacy, a list of of Enhle Mbali’s demands has just been shared online.

Among others, Enhle Mbali wants the celebrated DJ and producer to settle her legal fees of R4 million, grant her R100k monthly allowance, including child support, and R17k in beauty expenses. She also wants the R30k she used to receive from Black Coffee to be reinstated. He had alleged stopped sending her the sum. 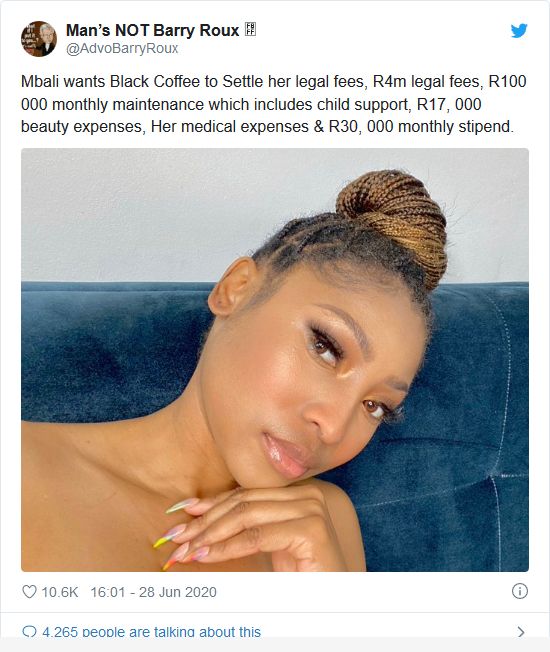 It remains to be seen how both parties resolve the issue

Tags
Black Coffee Enhle Mbali
John Israel A Send an email 29 June 2020
Back to top button
Close
We use cookies on our website to give you the most relevant experience by remembering your preferences and repeat visits. By clicking “Accept All”, you consent to the use of ALL the cookies. However, you may visit "Cookie Settings" to provide a controlled consent.
Cookie SettingsAccept All
Manage Privacy