If there is anything to know about Reason right now, it is that the Mzansi star is ready to live his life. Some time within the week, he celebrated his 34th birthday and took to social media to voice out his deepest thoughts.

He revealed that he had been struggling with depression for some time, but decided to leave his past behind after a chat with DJ Maphorisa. He also revealed that he’s been making the best music of his life recently.

Taking to Instagram recently, he teased a new Amapiano song titled “Khanda Shisa”. The song features DJ Maphorisa as Sizwe Alakine. That’s Phori’s new stage name. Fans seem to be responding well to the song as the comments section has been flooded with excited responses. 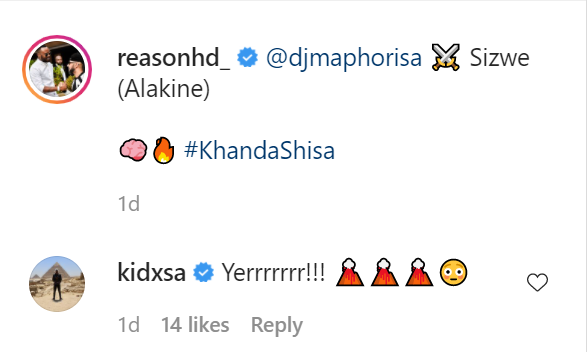 Tags
Dj Maphorisa Reason Sizwe Alakine
John Jabulani Send an email 3 July 2021
Back to top button
Close
We use cookies on our website to give you the most relevant experience by remembering your preferences and repeat visits. By clicking “Accept All”, you consent to the use of ALL the cookies. However, you may visit "Cookie Settings" to provide a controlled consent.
Cookie SettingsAccept All
Manage Privacy