Real Hose wives of Durban cast member Laconco earned the ire of dome viewers by speaking only Zulu during MaKhumalo and Mseleku’s dinner, invariably excluding other guests who don’t understand the language.

Polygamy was the key topic during the dinner, which some viewers have described as a big fail because the hosts, according to them, have no hosting skills or etiquette.

Because most of the ladies couldn’t follow the Zulu conversation, they felt excluded and irritated. And so did dome viewers of the show.

Some viewers stood up for Laconco, though. This class of supporters insisted that nothing should stop a Zulu woman from speaking her language. Another criticized those who think it’s only okay to speak English and leave out a local language.

Apart from Laconco, cast member Annie had her share of critical slaps from viewers. One critic noted that she’s married to a Zulu man, has Zulu kids, and yet gets offended when people speak the language in front of her.

Amid the storm, another cast member, Sorisha, is being lauded because she gets along well with others and has been mostly out of all the drama.

How long until critics move on from firing shots at Laconco? You can check out some reactions below, 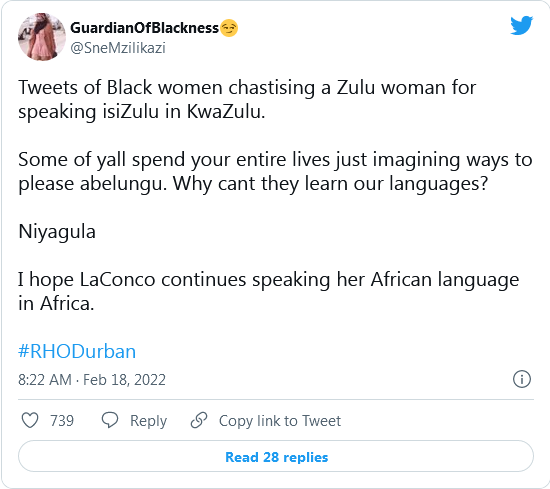 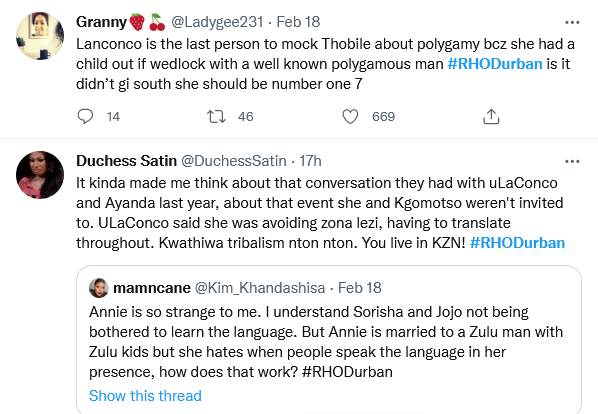 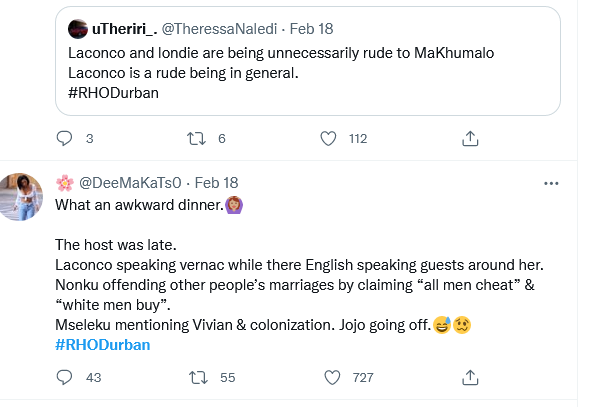 From the sound and look of things, though season 2 of RHOD, is running with more drama than the previous season.

Tags
Laconco RHOD
John Israel A Send an email 20 February 2022
Back to top button
Close
We use cookies on our website to give you the most relevant experience by remembering your preferences and repeat visits. By clicking “Accept All”, you consent to the use of ALL the cookies. However, you may visit "Cookie Settings" to provide a controlled consent.
Cookie SettingsAccept All
Manage Privacy