Rouge has never doubted her musical gifts and even her greatness as a rapper. In fact, she declaims this when she can. For instance, on the set of V Entertainment last year (2019) she made it clear she is the best female rapper in South Africa.

If you missed the episode of that interview, you can check it out below.

Well, it appears it is not everyone who knows of Rouge rapping gifts, or cares to know. This much became apparent when a Twitter denizen questioned if Rouge had ever been nominated for a SAMA (South African Music Awards) before.

Amused, Rouge detailed her résumé, which should put her in the league of one of the most outstanding female rappers in South Africa – if awards are to be a yardstick for determining this. 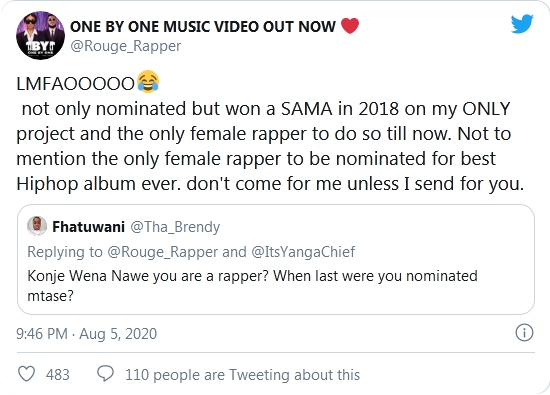 If she wasn’t nominated for a SAMA this year, it was because, according to her, she did not submit any song.

Tags
Rouge
John Israel A Send an email 8 August 2020
Back to top button
Close
We use cookies on our website to give you the most relevant experience by remembering your preferences and repeat visits. By clicking “Accept All”, you consent to the use of ALL the cookies. However, you may visit "Cookie Settings" to provide a controlled consent.
Cookie SettingsAccept All
Manage Privacy