Elon Musk has not hidden his support for the people of Ukraine amid Russia’s aggression in the East European country. The Tesla boss is taking things a bit higher by challenging Russian President Vladimir Putin to a fistfight for the destiny of Ukraine.

The Tesla boss made his position known in a tweet yesterday (Monday, 14 March). He wrote the Russian president’s name in Russian and Ukraine in Ukrainian.

While President Putin has not responded to Musk’s tweet, government agencies have been responding to the Tesla boss. For instance, Dmitry Rogozin, head of Russian space agency Roscosmos, responded to Musk.

Rogozin called Musk a “little devil” and urged the Tesla boss to compete with him instead, noting it would only be a waste of time anyway because Musk was a “weakling.” 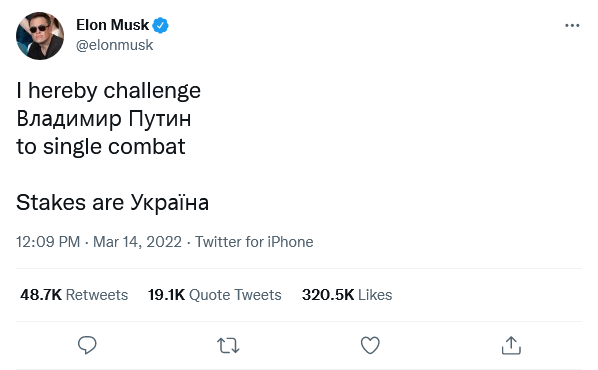 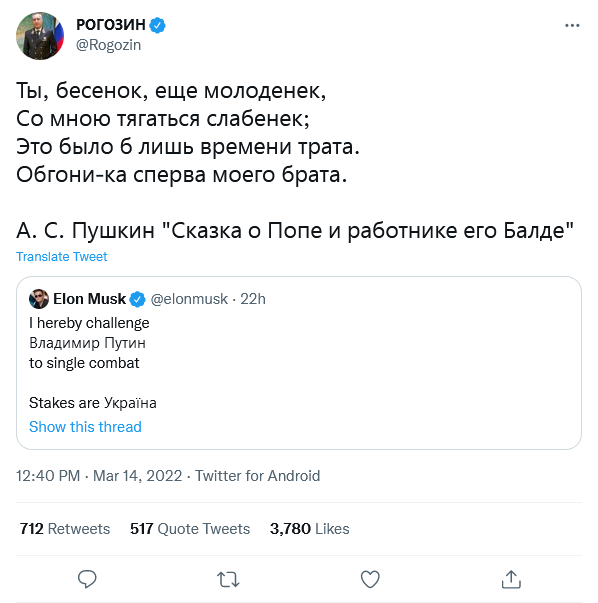 Well, while Rogozin thinks Musk is a weakling who can do nothing, Ukraine’s Vice Prime Minister Mykhailo Fedorov thinks Musk can demolish Putin and lock him somewhere in space.

The vice president and Musk have acknowledged the accelerated rollout of internet coverage in Ukraine through Musk’s satellite internet company Starlink. The rollout is meant to help the embattle Ukraine stay connected amid the Russian onslaught on the country’s internet infrastructure.

Tags
Elon Musk
John Israel A Send an email 15 March 2022
Back to top button
Close
We use cookies on our website to give you the most relevant experience by remembering your preferences and repeat visits. By clicking “Accept All”, you consent to the use of ALL the cookies. However, you may visit "Cookie Settings" to provide a controlled consent.
Cookie SettingsAccept All
Manage Privacy