The drama is not over yet regarding the disappearance of DStv channel 407 (Russia TV) from the MultiChoice network.

South Africans had woken up one morning to find the channel unexpectedly gone. They stormed social media, inquiring what happened, forcing DStv to release a statement.

In a statement, the MultiChoice network had cited the sanctions imposed on Russia have affected the broadcast feed and the network would therefore no longer air Russia Today until further notice.

The clarification only enraged some listeners, who insisted that DStv should either reinstate the channel or else refund the payment made by them, the subscribers.

So far, though, DStv has not made any refund.

The South African Democratic Teachers Union (SADTU) appeared to have joined the fray. In a statement, the body urged MultiChoice to reinstate Russia Today of face boycott.

It described the removal of channel 407 as an insult to media freedom as well as freedom of expression in South Africa.

Last we checked MultiChoice had not responded to SADTU, which claims to be the biggest union in the public service sector in South Africa.

While some members of the public hailed the union for its initiative, some others were just contemptuous of it. 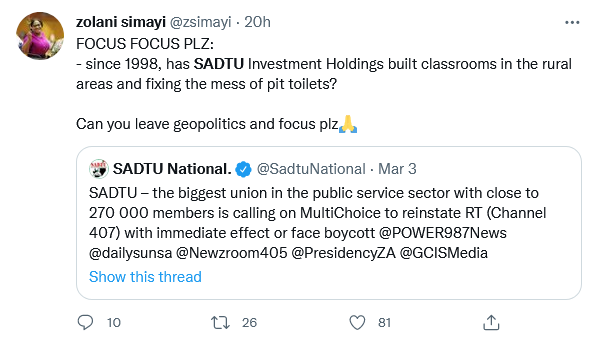 Sadtu wants to strike for a TV channel while kids are still using pit toilets and their members are under performing.

How did Minister Nxesi get this job? 😳🤔

But what will change?

Tags
SADTU
John Israel A Send an email 4 March 2022
Back to top button
Close
We use cookies on our website to give you the most relevant experience by remembering your preferences and repeat visits. By clicking “Accept All”, you consent to the use of ALL the cookies. However, you may visit "Cookie Settings" to provide a controlled consent.
Cookie SettingsAccept All
Manage Privacy