The generous side of Kiernan Jarryd Forbes, the South African rapper long famous as AKA, played out just recently, to the excitement of a particular fan who had voted him multiple times at this year’s South Africa Music Awards (SAMA).

The fan, who goes by the Twitter handle @bantu_bhungane, shared a clip of how he voted multiple times for the “Energy” star, mentioning AKA, and asking if the SupaMega has anything for him.

From the clip, it was clear the fan’s phone was pretty old and in a bad state. AKA noticed this. Impressed by the fan’s devotion, He noted that the fan’s phone had seen better days and asked him to send him his bank details. It can be deduced that AKA wanted to send him money to acquire another phone. 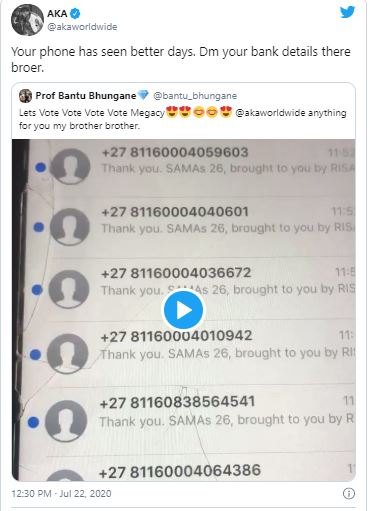 By the way, AKA was nominated in the Record Of The Year and the Video Of The Year categories for his soaraway track “Jika,” which popped online back in January 2020. The music video for the song currently has over 4 million views, making it one of AKA’s most successful records this year.

Well, what do you think of AKA’s magnanimity? You might wish to join the conversation by dropping your thoughts in the comment section below.

Tags
AKA
John Israel A Send an email 23 July 2020
Back to top button
Close
We use cookies on our website to give you the most relevant experience by remembering your preferences and repeat visits. By clicking “Accept All”, you consent to the use of ALL the cookies. However, you may visit "Cookie Settings" to provide a controlled consent.
Cookie SettingsAccept All
Manage Privacy