Sarafina was a South African drama that told the story of Leleti Khumalo, a young black woman struggling for freedom during the apartheid era. Directed by Darrell Roodt and released in 1992, the movie has managed to stay in the consciousness of movie lovers since.

In the Big Brother Mzansi reality show, which is currently in its third season, somehow, some viewers are juxtaposing Nale’s character with Leleti Khumalo’s – noting how she’d become “silent” and not contributing much to the drama in the house.

Some viewers think she is just good by nature and that the Big Brother Mzansi house is just not her place, as the schemers within would not only think her boring but might end up wanting to see her evicted.

It’s eviction season in the Big Brother Mzansi house, and it appears that Nale is the one housemate viewers have in mind to send home on Sunday. It remains to be seen, though, if she’s eventually evicted.

Her fans who are championing for her continued stay in the Big Brother house have been fighting back, sharing not just her merits but what she has been able to accomplish at the age of 24, including working at Steers. Here’s the mixed bag.

It must be nice ne!
Themba and Libo enjoying Steers. #BBMzansi pic.twitter.com/H5fNQ2GPTR 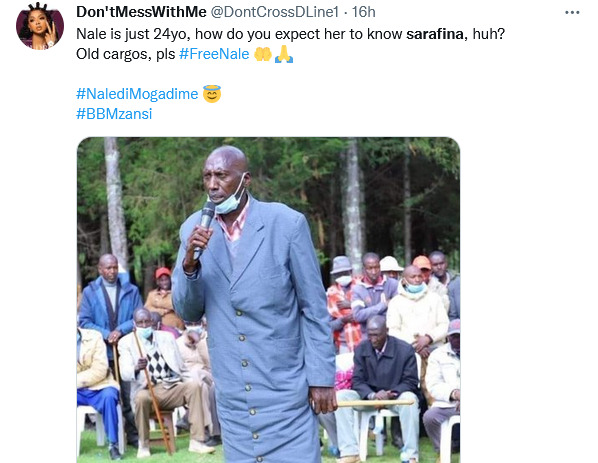 Tags
Big Brother Mzansi Nale
John Israel A Send an email 5 March 2022
Back to top button
Close
We use cookies on our website to give you the most relevant experience by remembering your preferences and repeat visits. By clicking “Accept All”, you consent to the use of ALL the cookies. However, you may visit "Cookie Settings" to provide a controlled consent.
Cookie SettingsAccept All
Manage Privacy