Soweto’s most beloved rapper Anele Mbisha, alias Saudi is perhaps the latest act of his level to blow his own trumpet. In a twitter post that caught a lot of attention online, the singer reminded his fans as well as his foes that he is a Grammy-nominated rapper.

As a matter of fact, he wished to let everyone know that he is possibly the youngest artist (in his Genre) from SA to obtain such a title. The Make you Proud brainchild was nominated for the prestigious music award when he was only 24-years of age. If that is not something to be proud of then I don’t know what it is. 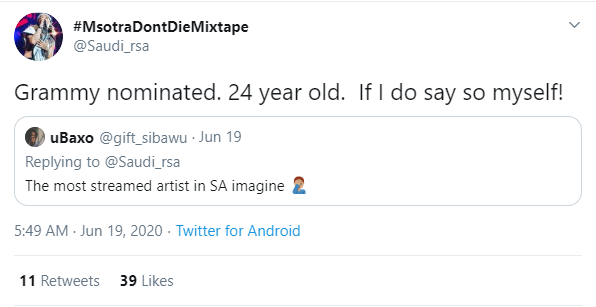 Some of Saudi’s biggest tunes include Drip, Problems, and his trend-worthy Drips Leak Mixtape. Nevertheless, his major successes do not imply that things have always been smooth for him. At one time, he almost lost it all after releasing an entire album dubbed D.R.U.G.S Inc.

The said album raised mixed reactions with most people believing that the young rapper was actively promoting Drug abuse in his home country. Drugs are a major problem in South Africa’s informal settlement and him looking like he was promoting them was a really bad move.

All in all, Saudi is a great rapper. His competence and resilience in the game are something to admire. The artist was once signed to Ambitiouz Entertainment before his departure earlier this year (2020).

Tags
Saudi Grammy Awards
John Jabulani26 June 2020
Back to top button
Close
We use cookies on our website to give you the most relevant experience by remembering your preferences and repeat visits. By clicking “Accept All”, you consent to the use of ALL the cookies. However, you may visit "Cookie Settings" to provide a controlled consent.
Cookie SettingsAccept All
Manage Privacy