South African rapper Shane eagle has confirmed a new album is on the way. So if you’re a fan of the songster, you may want to watch out for that.

The songster announced the imminent project in recent posts to Twitter. He was laconic, offering neither a cover art for the project nor a potential guest list nor yet a release date,

Anyway, as the leading South African music and entertainment blog, you can count on us to share the album with you as soon as it’s released. In order not to miss it, you might want to follow our social media channels subscribe to our newsfeed, and stay tuned for updates. 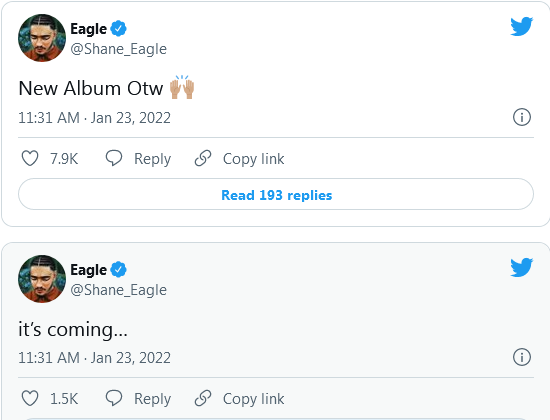 The reactions to the announcement have been massive, with over 7k fans liking the post at the time of writing. It promises to be an interesting drop, and clearly, fans cannot wait to lay their hands on what might drop next from the musician’s orbit.

Easily one of the notable voices in South African music, Shane eagle has long established himself in the hearts of music lovers across the Rainbow Nation. He had a splendid 2021. 2022 promises to be an even grander year. We’ll be here to share that story.

Tags
Shane Eagle
John Israel A Send an email 24 January 2022
Back to top button
Close
We use cookies on our website to give you the most relevant experience by remembering your preferences and repeat visits. By clicking “Accept All”, you consent to the use of ALL the cookies. However, you may visit "Cookie Settings" to provide a controlled consent.
Cookie SettingsAccept All
Manage Privacy