“Dark Caves” crooner DJ Shimza has just bagged a new partnership deal. The songster announced the partnership himself, via his Instagram page, but he failed to disclose with what brand he has struck a partnership.

In the post he shared, there was just a bottle with no label. He asked fans to guess what brand he now has a partnership with. Thus began a guessing game among his fans. So far, though, the songster has yet to reveal if one of his fans has guessed right. 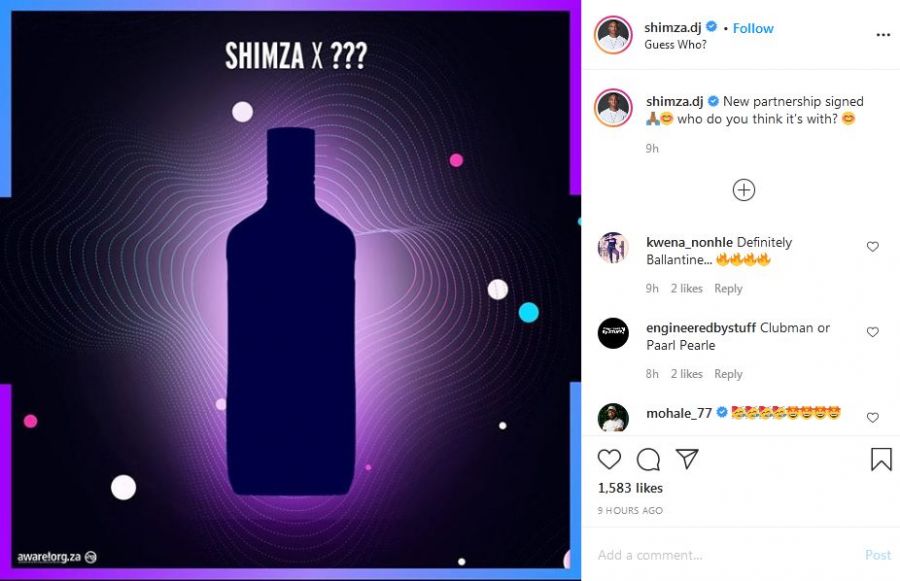 Out here, we are guessing he might have struck a deal with one of the alcohol and wine brands out there.

By the way, if you want to join the guessing game in the hope of some reward, Shimza hasn’t said he would be compensating fans who get the answer right. Anyway, it wouldn’t hurt to try your luck.

The partnership follows the release, by Shimza, of two new singles: “Maru” and “Calling Out Your Name” (Mikhaela Faye). In the coming days, expect him to call out the name of the brand.

Well, have you any idea what partnership deal Shimza has bagged? You might want to join the conversation by dropping your thoughts in the comment section.

Tags
Shimza
John Israel A Send an email 10 November 2020
Back to top button
Close
We use cookies on our website to give you the most relevant experience by remembering your preferences and repeat visits. By clicking “Accept All”, you consent to the use of ALL the cookies. However, you may visit "Cookie Settings" to provide a controlled consent.
Cookie SettingsAccept All
Manage Privacy