You are probably aware the nominee list for the BET Awards was announced recently, followed by the winners’ list. South Africa’s Sho Madjozi and Nigeria’s Burna Boy, among others, were on the list in the Best International Act category.

Well, Burna Boy has been announced winner. It appears Sho Madjozi is pretty cool with this, although she had accused the “Africa Giant” of influencing the taking down of “Own It,” Stormzy’s song on which both of them featured.

Taking to Twitter soon after the winner was announced, alongside winners in other categories, the “Limpopo Champions League” muso, who recently detailed her lockdown struggles, thank the others of the award for finding her worthy to be in the list. According to her, it was an honour to be nominated. 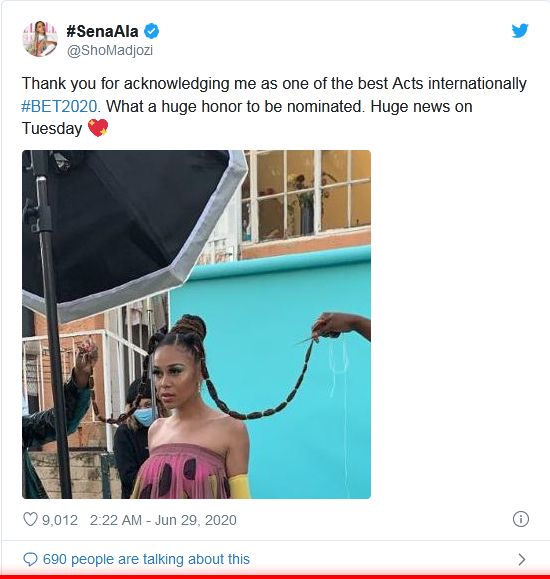 She said nothing about her rival who walked home with the scudetto, and it is doubtful she would say anything about him winning at this moment. Or what do you think? The coming days should reveal a lot, and we can’t wait to share it with you.

Well, what do you make of Sho Madjozi’s reaction after she lost to Burna Boy? You may want to join the conversation by dropping your thoughts in the comment section below.