“Limpopo Champions League” songstress Sho Madjozi has blamed colonizers for the disconnect among African countries, especially those who are neighbours.

The celebrated singer made this know in a tweet days ago, documenting her travels across the continent. She insists African countries interact very little with other countries that had different colonizers.

However, she thinks Kenya, South Africa and Ethiopia are luckier in that they possess airport hubs and record more flights. She thinks language barriers as part of the problem.

Her post has been liked over 2k times. With her fans making suggestions regarding the problem she spoke about. 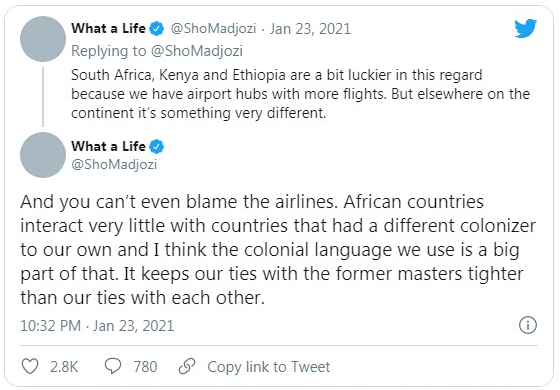 By the way, Sho Madjozi is one of South Africa’s most love singers. She also one of the most travelled. She has released several hit singles, including “John Cena,” a song named for the wrestling champ and presenter john Cena.

What do you think of Sho Madjozi blaming the colonizers for the disconnect in Africa? You’re welcome to join the conversation by dropping your thoughts in the comment section below.

Tags
Sho Madjozi
John Israel A Send an email 2 February 2021
Back to top button
Close
We use cookies on our website to give you the most relevant experience by remembering your preferences and repeat visits. By clicking “Accept All”, you consent to the use of ALL the cookies. However, you may visit "Cookie Settings" to provide a controlled consent.
Cookie SettingsAccept All
Manage Privacy