Mzansi songstress Simphiwe Dana has got some radical plans going forward, and some of her fans are pretty shocked with it.

The songstress recently came out as a gay and indicated she is marrying another woman. She spoke of her fear that she might be rejected because of her now public gay status, but added that she has never been happier. 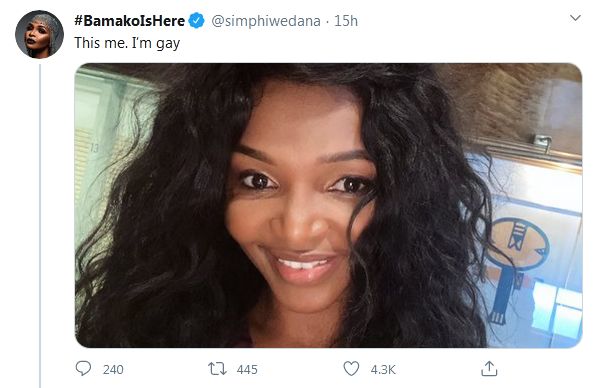 Simphiwe Dana is but one of several Mzansi musos who have come out as gay. Another notable gay music figure is muso Somizi.

While some fans have condemned her for being gay and for coming out about her sexuality, others, including some celebs, are supporting her massively. Lerato Kganyago is among the celebs showing support to Simphiwe Dana.

Sharing Simphiwe Dana’s tweet on her coming out as gay, Lerato Kganyago congratulated Simphiwe Dana on her desire to settle down with a woman, adding that love is beautiful and she wishes her more happiness.

There are many gays in South African and other parts of Africa, but the ratio of acceptance for gays is pretty low. Experts predict this will change soon.

Well, what do you think about Simphiwe Dana coming out about her lesbian status? You might want to join the conversation by dropping your thoughts in the comment section below.

Tags
Simphiwe Dana
John Israel A Send an email 6 November 2020
Back to top button
Close
We use cookies on our website to give you the most relevant experience by remembering your preferences and repeat visits. By clicking “Accept All”, you consent to the use of ALL the cookies. However, you may visit "Cookie Settings" to provide a controlled consent.
Cookie SettingsAccept All
Manage Privacy