What has Mzansi’s Simphiwe Dana been up to? Well, the celebrated singer has denied exploiting her house maids, stating that she treats them all well.

In a comment to Anele’s tweet, Simphiwe Dana, who recently came out as gay, shocking many by so doing, noted that her rules for any new nanny is to wash white linen and her (Ms Dana’s) clothes by hand. But they may wash her kids’ clothes in the washing machine. Just the kids’ clothes. 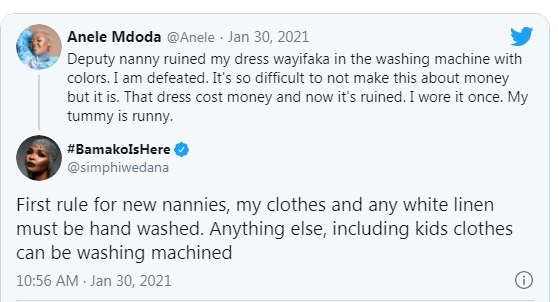 She was dragged online for making the nannies wash her clothes and white linen by hand. But then she clarified that she does exactly the same thing herself – washing them, as well as white linen, by hand.

She also claims to pay them well, never exploiting them. It appears some fans are still not convinced. But then the songstress has made her point or what do you think?

You might want to join the conversation by dropping your thoughts in the comment section below. Do.

Tags
Simphiwe Dana
John Israel A Send an email 2 February 2021
Back to top button
Close
We use cookies on our website to give you the most relevant experience by remembering your preferences and repeat visits. By clicking “Accept All”, you consent to the use of ALL the cookies. However, you may visit "Cookie Settings" to provide a controlled consent.
Cookie SettingsAccept All
Manage Privacy