Simphiwe Dana voices out her concern with SA leaders using authoritative tones to address the people.

A lot has been going on in the country, and many have shared their thoughts on them. Honestly, things have been different for a while, and some believe that so much has been revealed.

In recently shared tweets, Mzansi singer, Simphiwe Dana voiced out her concern with SA leaders addressing the people in an authoritative tone. This comes after Julius Malema’s fiery address to Mzansi on Thursday. Simphiwe tweeted that what she’s noticed are early signs of a dictatorship. According to her, she’s only highlighting it because SA prides itself in the way she governs.

She further stated her fears that a time may come when they people would not be able to disagree with the government. Some of her followers believe this to be true. Hit the comments section with your thoughts on it.

“I’m getting increasingly concerned with the authoritarian tone our leaders are taking with us. And the authoritarian ways they’re adopting. These are the early signs of a dictatorship. I’m saying this because we pride ourselves in the way SA governs.”

“I worry that soon we won’t be able to disagree with our leadership without men with big guns showing up on our doorsteps and our own people cheering them on. I hope to God I’m wrong. This pandemic is exposing a lot of ish.” 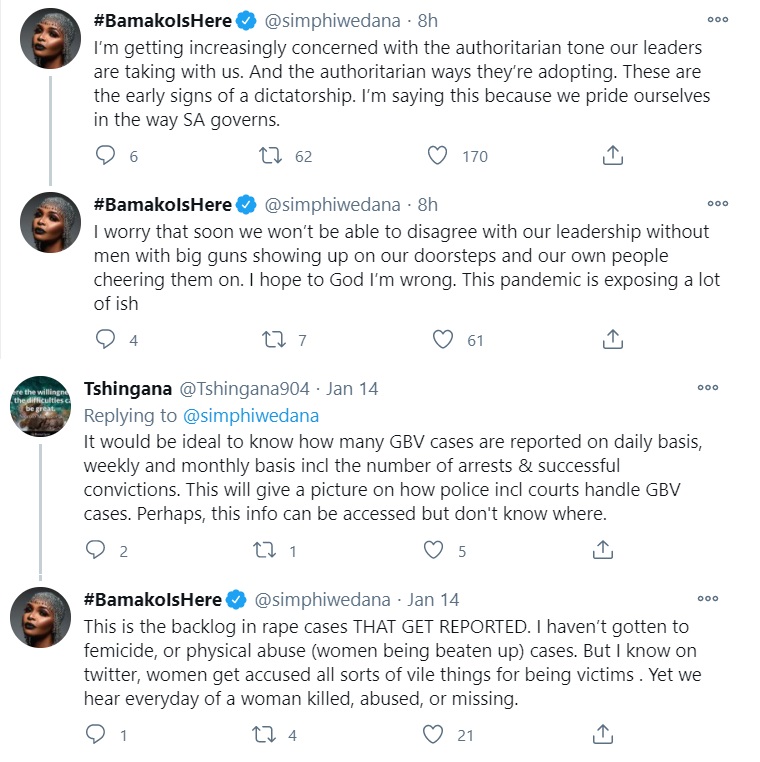 Tags
Simphiwe Dana
John Jabulani Send an email 15 January 2021
Back to top button
Close
We use cookies on our website to give you the most relevant experience by remembering your preferences and repeat visits. By clicking “Accept All”, you consent to the use of ALL the cookies. However, you may visit "Cookie Settings" to provide a controlled consent.
Cookie SettingsAccept All
Manage Privacy