Sir Trill is about to reveal a generous side of him by giving all the profits of a song to the family of his late friend who had worked with him on it.

In a recent tweet, the “Ghost” musician noted the royalties from every song he did with the late amapiano musician Mpura will go to the musician’s family and team members.

This announcement pleased many social media users, and they commended him for it, with some of them mouthing prayers for him. 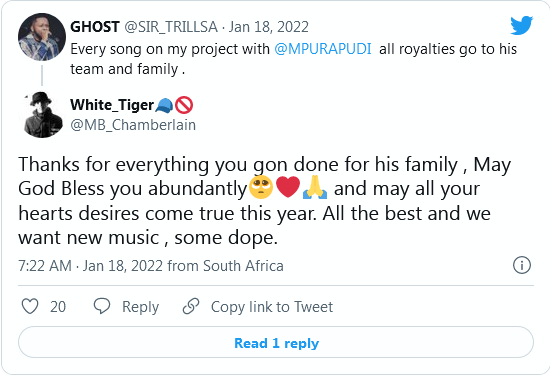 Mpura had perished in a car accident alongside five others last year while going for a gig. The accident had sent shock waves across the amapiano universe because it was the first time in amapiano history that the genre had lost five members on the same day.

In the intervening days since the accident, Mzansi, musicians and all, have been honoring the departed the way they see fit. In particular, the amapiano singer and DJ Lady Du had had a tattoo on her hand to honor Mpura and Killer Kau, who also died in the accident.

By the way, Sir Trill recently canceled his show due to fatigue. He now appears ready to take on the world again.

Tags
Sir Trill
John Israel A Send an email 20 January 2022
Back to top button
Close
We use cookies on our website to give you the most relevant experience by remembering your preferences and repeat visits. By clicking “Accept All”, you consent to the use of ALL the cookies. However, you may visit "Cookie Settings" to provide a controlled consent.
Cookie SettingsAccept All
Manage Privacy