At this rate, it is looking like one week, one drama at Kaya FM. The latest episode though has Sizwe Dhlomo and Mpho Maboi as cast members. What really happened, though?

By Sizwe Dhlomo’s account, show meetings start at exactly 1 p.m., and if a member of the crew wasn’t present in the building, they could as well follow things virtually.

Mpho, a newbie who had to replace Sandile Van Heerden, started missing those show meetings exactly one week after joining the show.

This meant that she would be clueless about what was being discussed and might not even have sports trivia prepped for the show. This was jeopardizing the quality of the show and didn’t sit well with him.

To ensure the issue is corrected, he spoke to her twice (on record, according to him) to have the issues resolved. But then she didn’t change and he had to go to her manager to have the issue addressed. She skipped the manager and called Sbo instead, and Dhlomo wanted to know why Heerden, who was competent and available, had to be replaced by someone who couldn’t deliver for the show. You can check out the thread below. 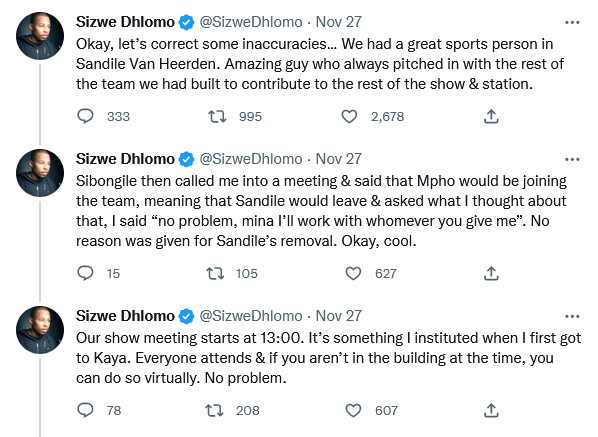 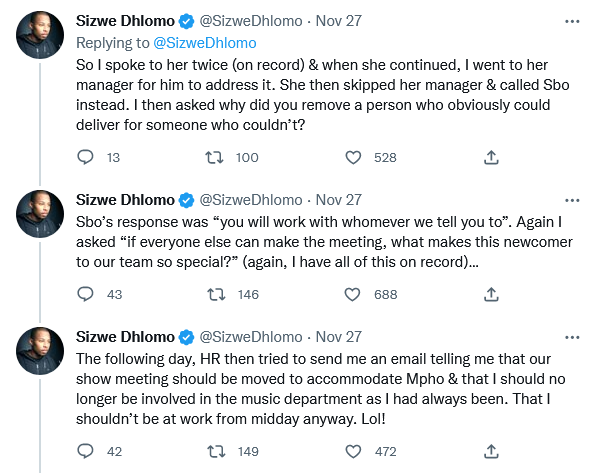 Social media users are sorely divided over the issue, with some insisting that Sizwe Dhlomo did the right thing, and others supporting Mpho.

Sizwe Dhlomo had conflicts with Unathi at the same station, forcing her to exit when she was found to have accused him falsely.

Tags
Sizwe Dhlomo
John Israel A28 November 2022
Back to top button
Close
We use cookies on our website to give you the most relevant experience by remembering your preferences and repeat visits. By clicking “Accept All”, you consent to the use of ALL the cookies. However, you may visit "Cookie Settings" to provide a controlled consent.
Cookie SettingsAccept All
Manage Privacy